On October 16, 2014, ABS-CBN on its official youtube channel has released the lyrics video of their Christmas Station ID for 2014. 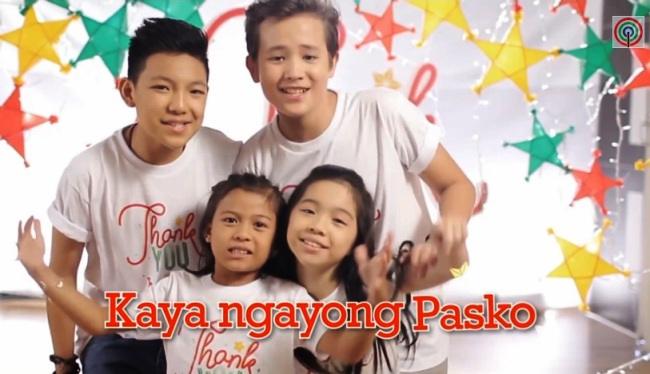 Every year Filipinos all over the Philippines and abroad anticipate ABS CBN’s Christmas Station ID. For the reason that it has a unique concept, and the music video is joined by Kapamilya’s well-known talents. Actually, even highly respected news anchors and network’s top executives participate in the singing of every year’s theme song.

“Thank You, Ang Babait Ninyo,” is the title of this year’s station ID. ABS-CBN Kapamilya network pays homage to the goodness of every Filipinos all over the world. The song also centers on the gratitude present in every Filipino.

According to the ABS CBN youtube channel, the launching of the official Christmas Station ID 2014 featuring numerous Kapamilya starts is in November.

Previously, The Voice of the Philippines coaches Lea Salonga, Sarah Geronimo, and Bamboo Manalac plus popular Kapamilya singers perform “Magkasama Tayo sa Kwento ng Pasko” for the 2013 Christmas Station ID. The video has garnered 3,256,883 views. It has received 21,567 likes plus numerous positive remarks from the commenters (as of the time of writing).

Next post: Cherry Mobile Me and Me Fun Price and Specs