Here are the Airlines economy class Inflight Meal photos in case you are curious how they look like when the cabin crew serves it. I have been traveling for more than 7 years with my family. Our travel adventure begin when we visited Singapore from Manila and the rest is history.

So far we have been to 4 continents namely Asia, Australia, North America, and  Europe. Most of the countries we have been to are visa-free, and some require a Visa. Hopefully, in the near future, we would be able to visit the 3 remaining continents and complete our travel bucket list.

I will be featuring in this post the Inflight Meal we ordered or complementary in the airline during our flight. Regardless of whether it is a short 1 hour, or 15 hours long flights to reach our destination.

Why Do We Order Airline Food?

First is to satisfy our tummy because it is certain that we will get hungry during the flight.

To ease our boredom and to pass time. Simply because It is really difficult to just “sit back and relax” when there is less thing to do while waiting to arrive at our destination country.

Another reason we ordered inflight food is to satisfy our curiosity. We want to know the taste of food served onboard. More so, if it is our first time to travel via that airline company.

We travel ones or twice a year, so for us, it is a privilege to have a meal 33000 feet above sea level. We also like the experience of having an airline meal while traveling out of the country.

Based on experience the food served depends on the flight schedule. There are times we were served dinner and breakfast for a 15-hour long flight.

There are also times that the crew only serves complimentary peanuts or sandwiches plus soda on a 1 to 2-hour long flight. But regardless of the flight time, we are still excited when eating inflight food.

This is a 14-hour non-stop flight. Although there are flights, that stop by Schipol Airport in The Netherlands before going straight to CDG Airport in France. At the time of our travel, the cabin crew offers 2 different complimentary meals for dinner and breakfast. 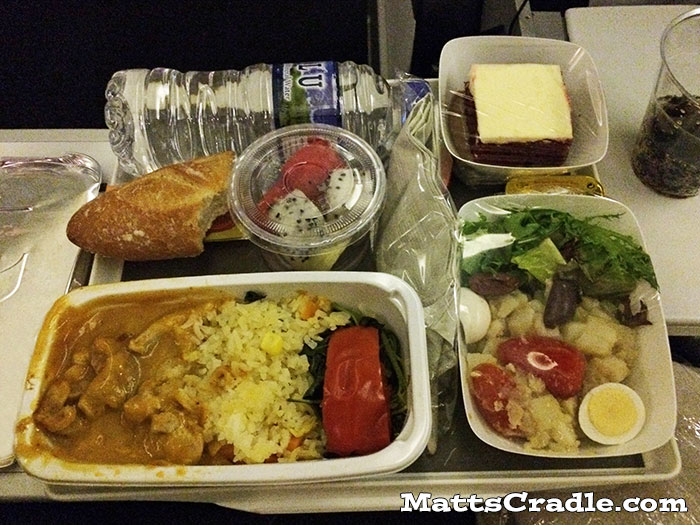 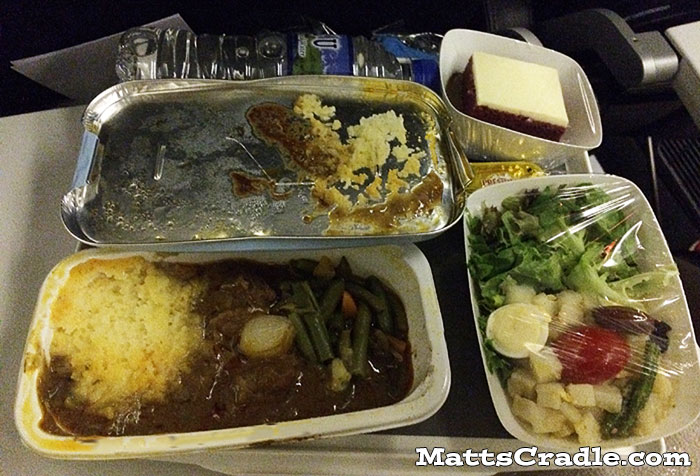 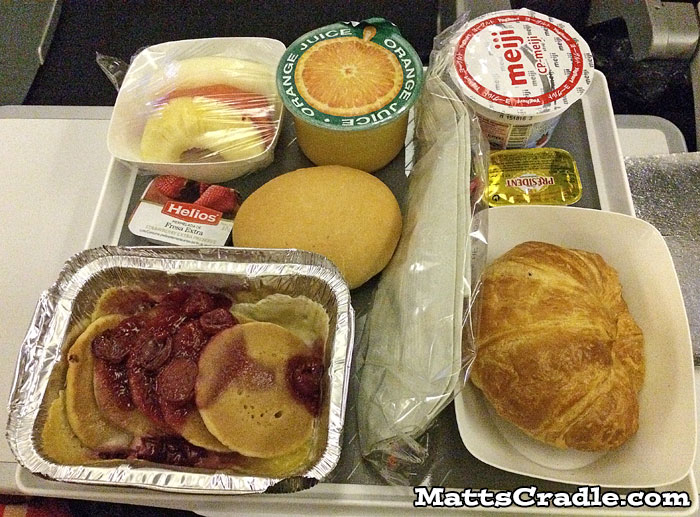 This is a 1 hour and 15 minutes non-stop flight from CDG Airport in France to Zurich Airport in Switzerland. This is the only variant available during our flight. 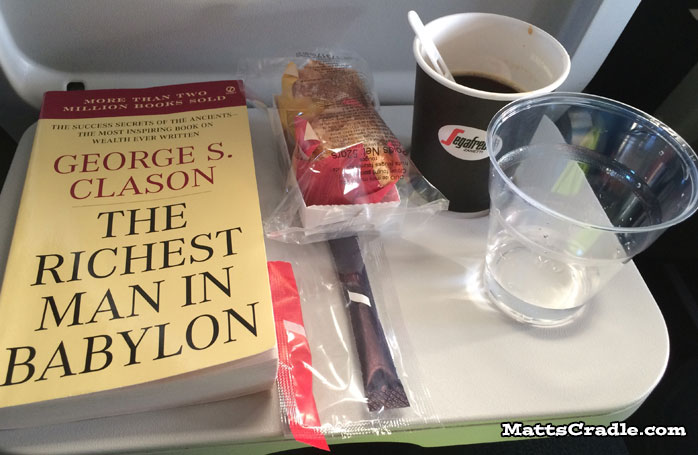 AirFrance is the flag carrier of France. It is a subsidiary of the Air France – KLM group. The headquarters is located in Tremblay-en-France.

KLM Economy Inflight Snack from Switzerland to The Netherlands

Zurich Switzerland to Amsterdam The Netherlands via KLM. This is a 1 hour and 45 minutes non-stop flight. 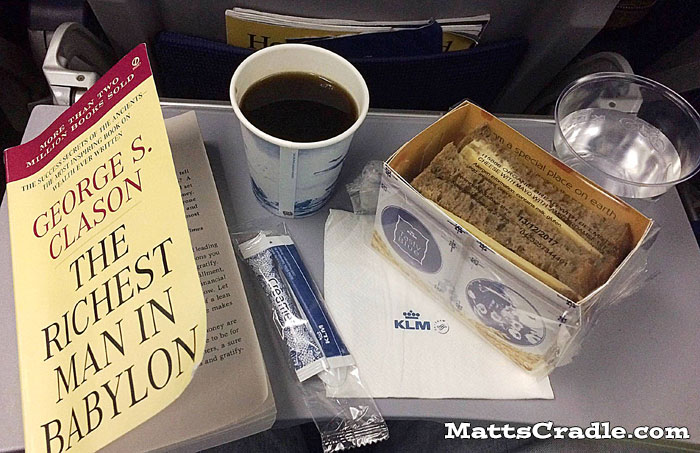 KLM Economy Inflight Food from The Netherlands to Singapore

This is a 12-hour and 20 minutes non-stop flight from Schiphol Airport The Netherlands to Changi Airport Singapore. Depending on the chosen schedule, there are flights that one-stop in CDG France before going straight to Singapore. 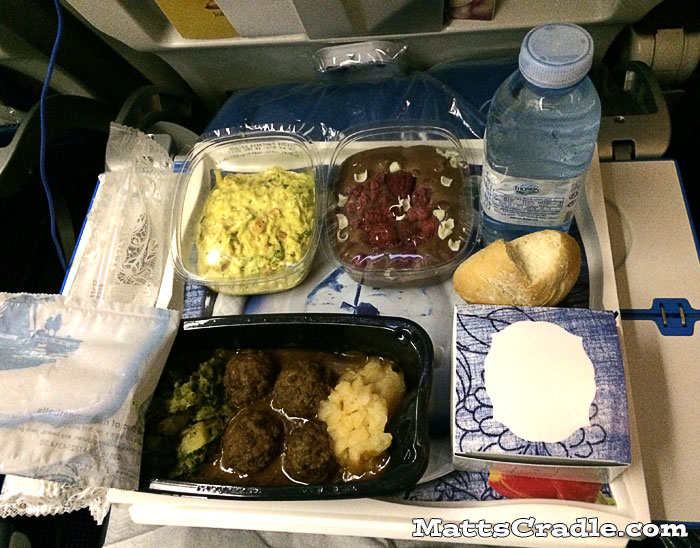 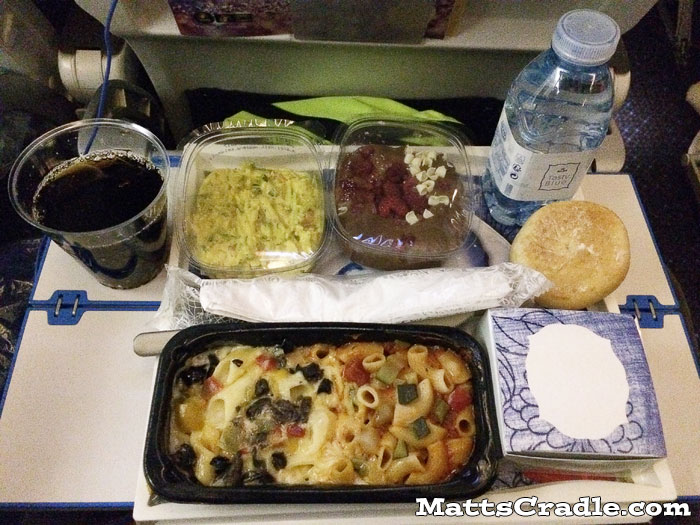 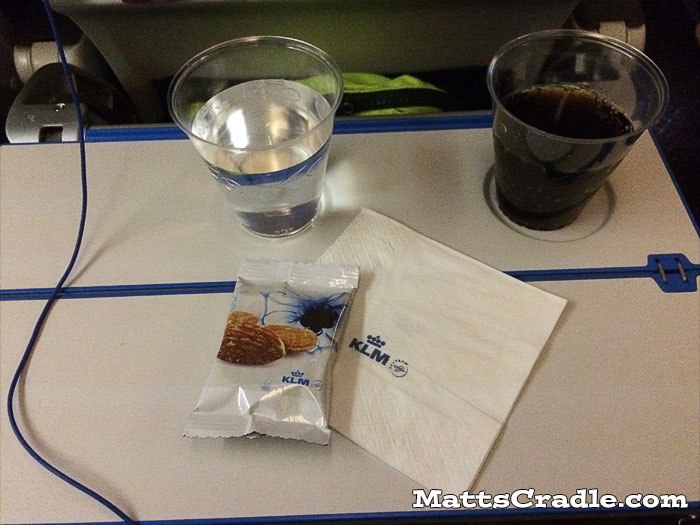 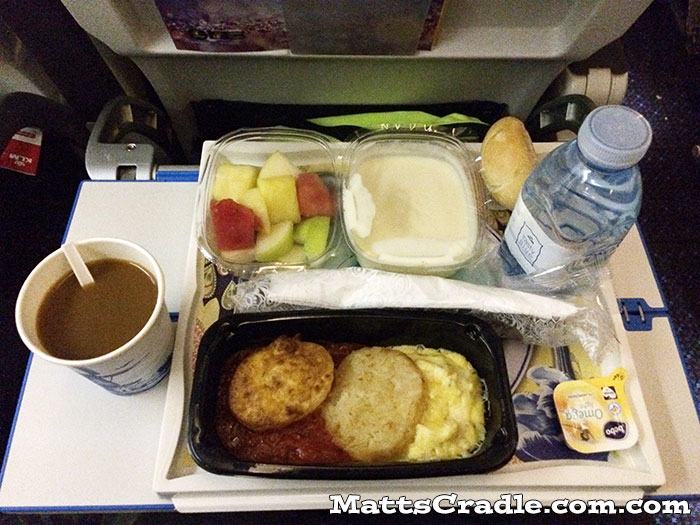 KLM Airlines is the flag carrier of The Netherlands. Its head office is located at Amstelveen. Its main hub is at Schiphol Airport in Amsterdam.

This is a 14 hour and 30 minutes long non-stop flight. There are flight schedules that have one-stop at different airports. Good thing we were able to select this flight as the one-stop will consume so much of our time during our travel. 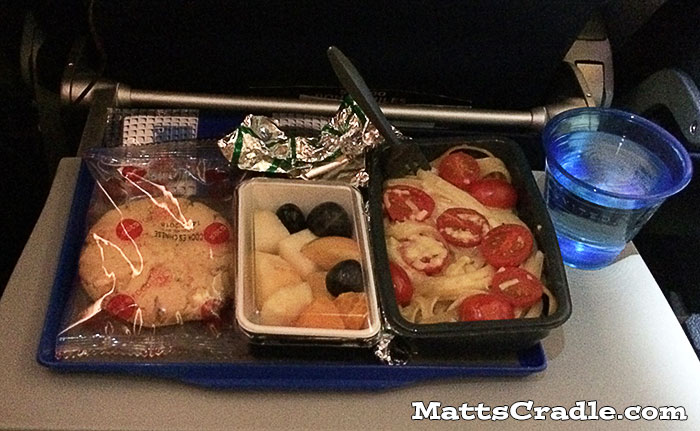 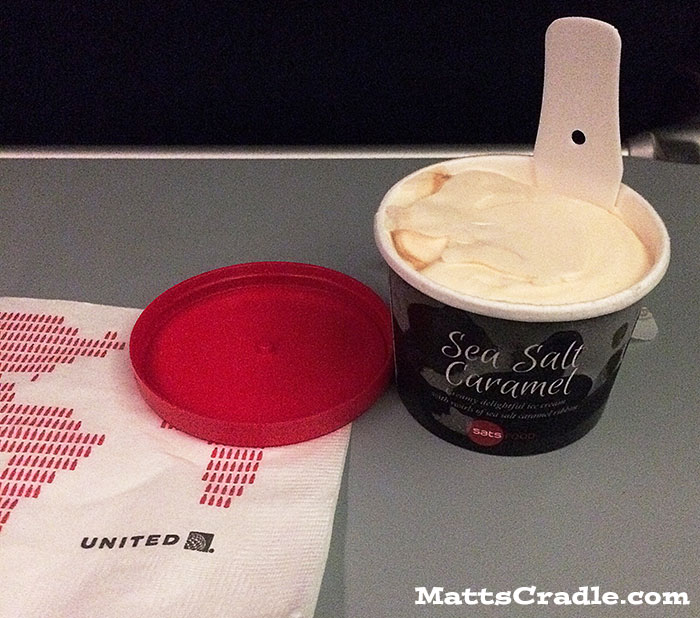 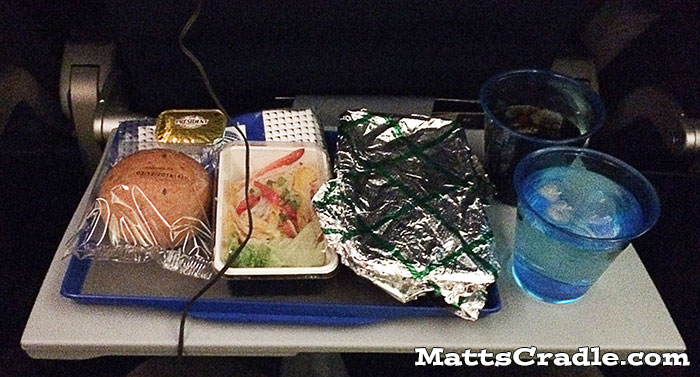 This is a 45 minutes flight.

Snack
1 pocket of pretzel and 1 can of soda. Unfortunately, I do not have a photo of it.

United Airlines Economy Plus from San Francisco California to Singapore

This is a 17-hour and 30 minutes long non-stop flight from San Francisco International airport (SFO) to Changi International Airport SG. I am actually having a hard time if the food served is for dinner, lunch, or breakfast probably due to the time difference as it is dark in the cabin most of the time. 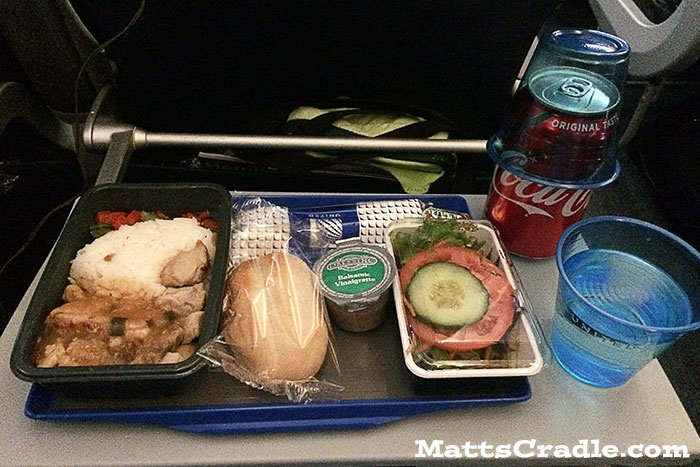 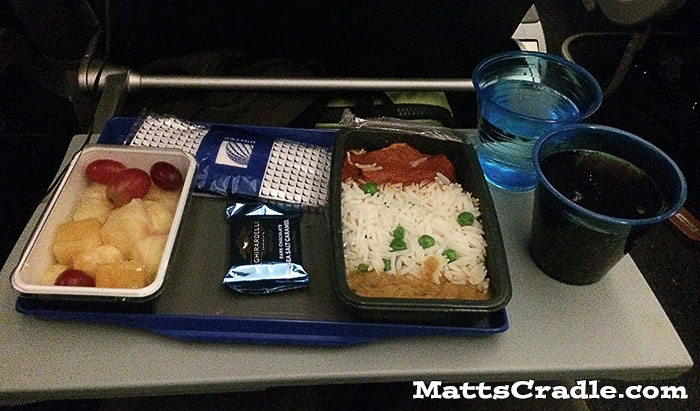 United Airlines Incorporated, is one of the major airline companies in the USA. United Airlines is the third-largest in the world in terms of route network and number of aircraft. Its headquarters is located in Chicago Illinois.

This is a 4 hour 5 minutes long non-stop flight. We board AirAsia Philippines when we travel to Seoul South Korea. Since this is a budget airline, we opt to avail of the inflight package which offers both the meal, seat selection, and baggage allowance. 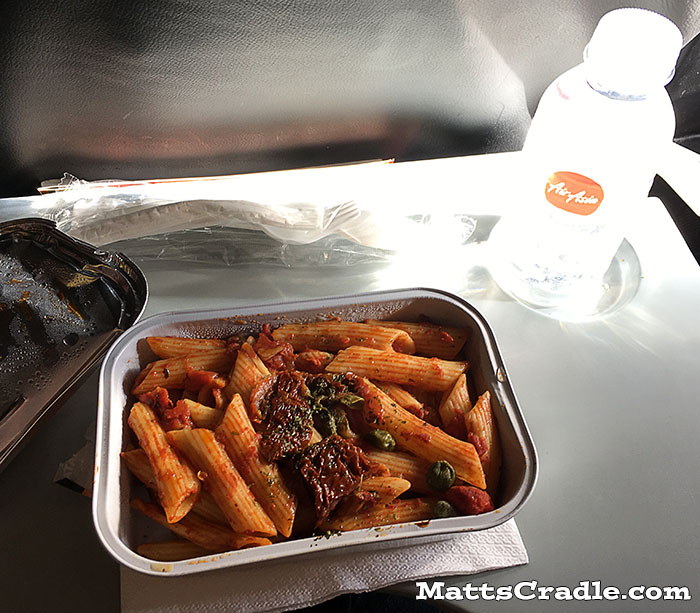 This is a 4 hour and 5 minutes long non-stop flight. 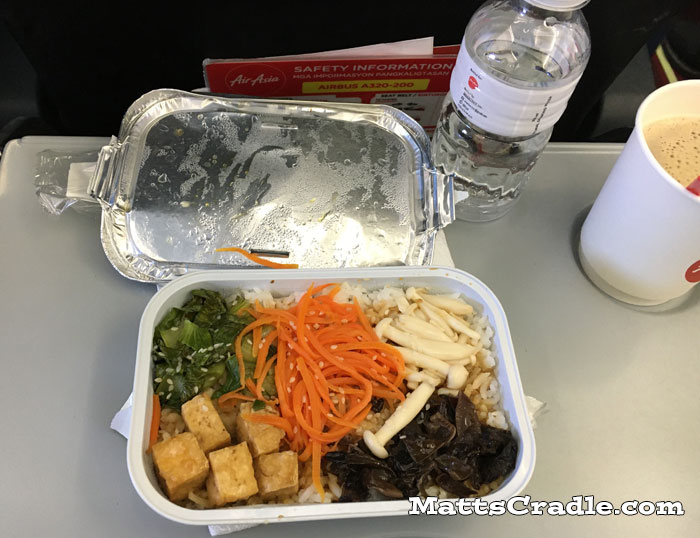 Philippines AirAsia Incorporated is a budget / low-cost airline company in the Philippines. Its headquarters is located in Pasay City in Metro Manila. Its parent company is AirAsia Malaysia.

This is the inflight food from Philippine Airlines in a 3 hour flight. The first photo is chicken barbecue with java or cajun rice (not sure hehehe), while the next photo is pasta with beef. 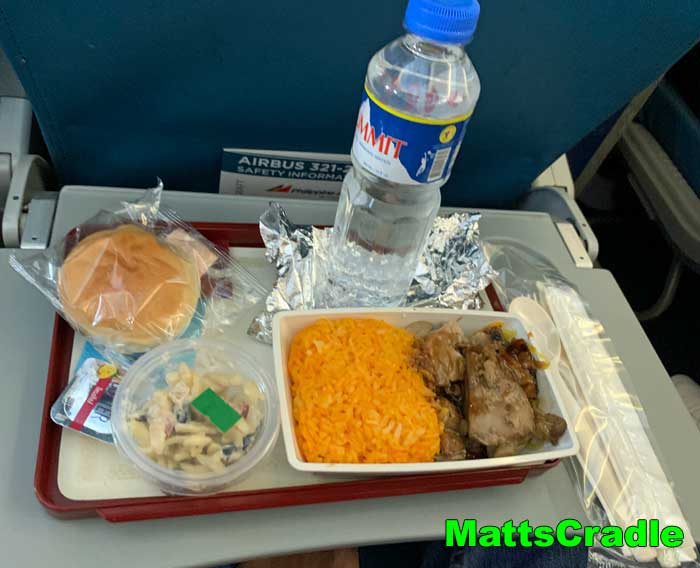 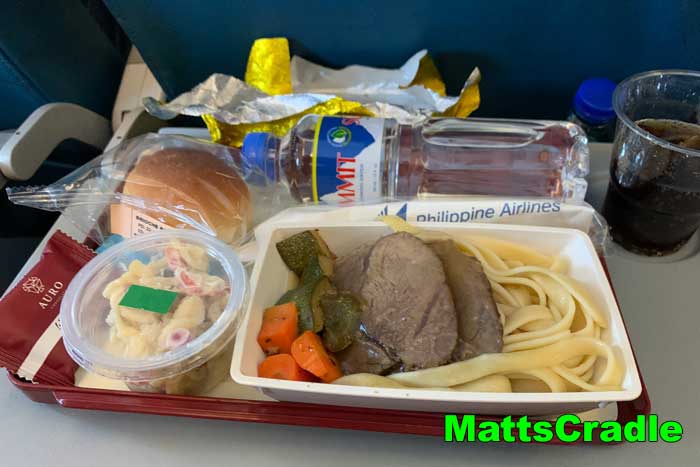 Aside from the main dish the serving also comes with bread bun, macaroni salad, summit bottled water, a cup of soda, and an Auro chocolate. I am satisfied with the food though what really got my attention is the utensils which are pretty sturdy. No worries of it breaking because it looks solid. 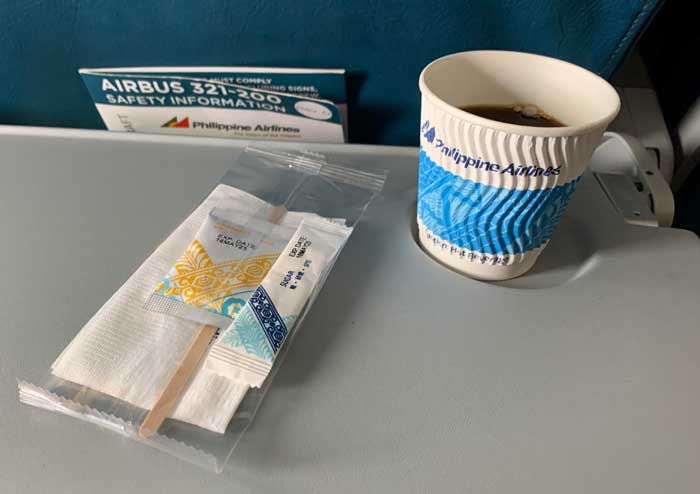 PAL also serve coffee or hot choco drink after your finish their inflight food. I appreciate the cup as it looks better than those used by popular coffee brand haha.

I hope in some way, I was able to give you an idea about the inflight foods served by various airline companies whether bound for Europe, Asia, or the USA. To be honest, some meals are inferior in taste if compared to food in fast food restaurants but the big difference between the two is you get to eat on the airplane. Anyway, I will continue to update this post for the airline meals once we go out of the country again.