Actress – hosts Anne Curtis will be visiting Dubai for her upcoming concert dubbed as AnneKapal The Forbidden Concert Round 2 this November 7,2014.

It’s Showtime host, actress, and endorser Anne Curtis together with special guests will be coming to the Middle East. They will stage a unique concert full of stunts and entertainment that would probably bring the audience to their feet. 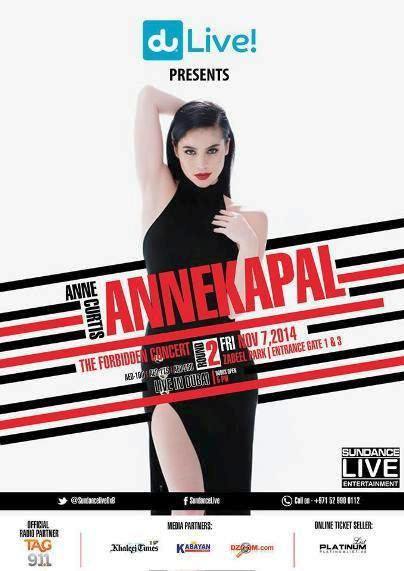 This is the second time that Anne Curtis will perform in Middle East. Back in December 2013, she held a concert at Al Jazeera Sports and Cultural Club in Abu Dhabi, United Arab Emirates. This coming November 7,2014 Anne will be having her round 2 of AnneKapal The Forbidden concert in Dubai at Zabeel park.

The concert will be held at Zabeel Park, Entrance Gate 1 and 3 on November 7,2014 (Friday). Doors will open at exactly 5pm.

Tickets can be purchased at platinumlist.net. For more details call +971 52 990 0112 or visit SundanceLIVE official Facebook page.