She recently created buzz on the web with her not so modest “scratching” action caught on cam during the last airing of the said show. The incident draws much attention making it one of the most search topics in yahoo Philippines. It also spread like wildfire on social networking sites such as facebook and twitter. 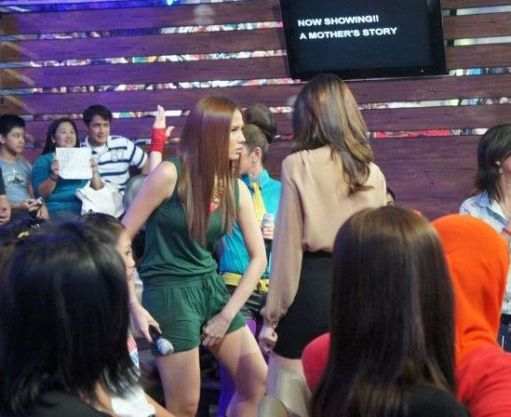 By looking at the photo it seems that Bianca was talking to Tony Gonzaga perhaps about the next segment that the show will be airing. Unfortunately, she may have forgotten that she’s doing a live show where studio audiences are actively filming or taking pictures of them if there’s opportunity even off cam. And that was just had happened, one spectator caught her fixing or scratching something just between her thighs.

That happening generated mix emotions and different opinions especially from fans, perhaps it’s a big turn off since as we all know she’s a beauty queen. As for me it doesn’t change a thing though it made me curious since I’m her fan, but it just shows that Bianca Manalo is still human, that sometimes makes mistake.