Vhong Navarro and co-host Billy Crawford on their Billy – Vhong Dance opening performance before the Sine Mo –to segment, is one of the most awaited parts by the fans.

It is where the audience especially the females express their excitement to see the duo showcase their awesome dance routine that is rhythmic to the music. Actually, even Lolos and Lolas who are present in the show mimic the steps of the dance craze. 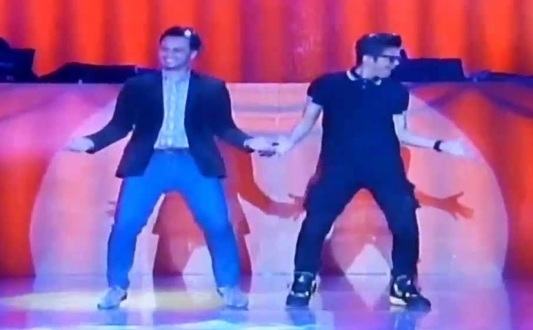 We are aware that Billy Vhong Dance music is just a remix however, we don’t know what are the titles and who are the artists behind those songs.

If you are here because you are searching for the said information then I would say you came to the right place. Below is the list of artists and songs used for the now popular dance craze.

Billy, Vhong, and Vice Ganda recently performed the latest dance craze of ‘It’s Showtime’ which was uploaded by ABS-CBN Entertainment on Youtube on November 19, 2014.

Watch the newest dance craze below with the title ‘Let’s Wobble’ or ‘Wobble wobble’ by Rafee.

Here are the rest of the songs that are usually part of the dance craze:

Hope you enjoy guys. Now you can create your own dance remix based on the songs used in the Billy Vhong dance craze.

Next post: Mcdonalds Kiddie Crew Workshop Schedule and Fees for 2014