Jason revealed that he never make videos and post them on social media, but he had to make an exception because of this Shell gas station toilet. He described it as a ridiculously awesome toilet.

In the 1-minute video, Jason Godfrey gives a tour of a male toilet in a Gas Station in Bohol, Philippines. From the outside, you might think that it is just a normal toilet, but when Jason opened its door, it turned out to be a hotel-like toilet plus free WiFi which is awesome according to the actor.

Jason Godfrey compared his room to this Shell toilet. According to him, the latter is better than his entire apartment. 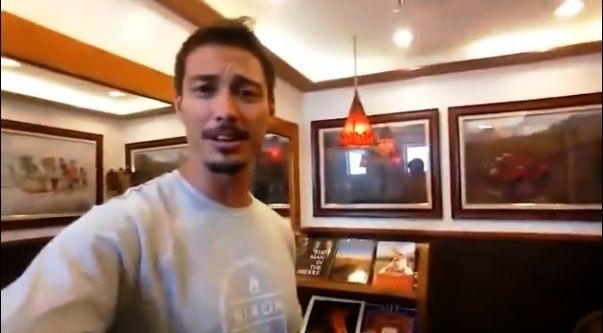 According to the commenters on Facebook, the ladies’ comfort room looks exactly the same minus the urinal. It is located at JA Clarin Street in Tagbilaran City.

Several commenters also posted a photo of another Shell Gas Station who has the same looking toilet. It is located somewhere in Amare Shell Gas Station also in Tagbilaran and in Shell Minglanilla, Cebu. Some thought that these mentioned fuel refilling stations belong to the same owner.

Because of the video shared by Jason Godfrey, the Shell gas station’s comport room received instant fame in Bohol. Some do a group selfie inside the comport room. The clip now has received 27700 likes, 21700 shares, and thousands of comments on Facebook.

Jason Godfrey is the main host of travel TV series ‘TEN’ which is airing on AXN Philippines. It is directed by Ronald Rillo. The show features things that make the Philippines a perfect ten. It is produced by Culture Shock Productions and Magnetic Sphere Productions.