Treasure need not to be expensive and so as the smartphone. This is why local mobile phone giant – Cherry mobile has released Cherry Mobile Amethyst, an android phone which cost only P2299.

Cherry mobile Amethyst is a dual SIM smartphone that runs on Jellybean 4.2. It is powered by 1Ghz dual core processor with a MALI 400 GPU. It has a 3.5” capacitive touchscreen which is enough for simple day to day internet activity. For its price offering of less than P2500, it still has a dual camera – 2MP rear and .3MP front. 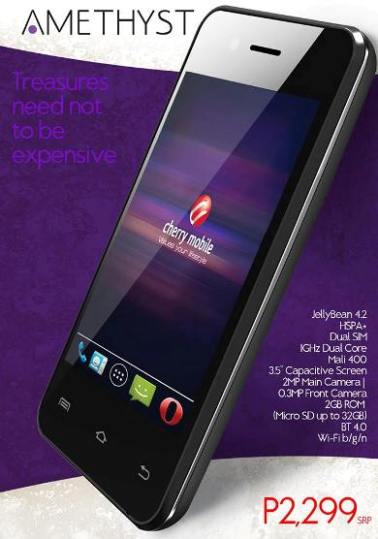 There is nothing much to ask for with its price. If you want better performance there are smartphones which cost little higher. I think plus P600, but you’ll get a little better phone such as Cherry Mobile Life and Starmobile play.

in android phone
0 comments… add one