Cherry Mobile has released a video of their newest flagship phone – the Cherry Mobile Omega Phablet featuring the “Queen of all Media,” Kris Aquino. This unit is known as Omega Infinity in CM Festival 2014 poster.

The idea in the video is quite simple and retro looking. Kris Aquino who portrays the classic character Betty La Fea (I supposed) shows the pros and cons of owning a small-sized screen smartphone, and carrying a huge tablet. She finds it hard to read the letters on the smartphone screen which requires the use of reading and magnifying glass. Since Betty is used with a typewriter, she also finds it difficult to key-in her messages.

On the other hand, she felt awkward using a tablet as it is heavy and hard to put inside her purse. It’s kind of frustrating because based on her bag closet, she likes carrying small sized bags.

All seems in misery until she got a tablet and a smartphone in one, which is the Cherry Mobile Omega Phablet. The reason probably is that the device has solved her techy problem. Also, she got the best of both worlds. A smartphone at the same time a tablet in one. 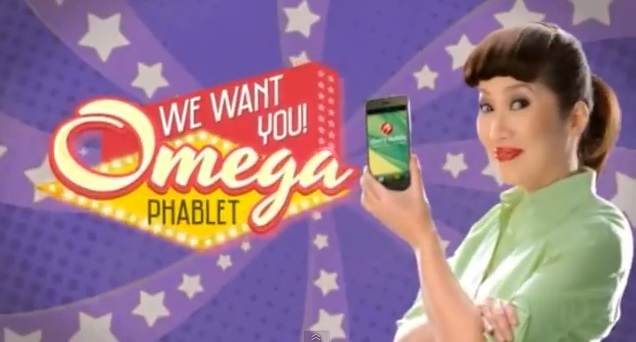 Cherry Mobile Omega Infinity is only the second phablet coming from the local mobile phone giant. Their first release was the Cosmos Z2 which is priced lower by P2000 (at P12999). Perhaps, because Z2 only has 16GB storage out of the box, has a slightly smaller display at 5 inches, and smaller battery capacity at 2000mAh.

*Credits to J Barbara of youtube for the video