If you are watching Will Time Big Time daily then probably you will be very interested in this new phone named after the host of the show Willie Revillame.

WilFone made and exclusively distributed by Cherry Mobile is heavily advertised daily on Will Time Big Time. Though you can see it there everyday I think it would consume much of their airing time if the complete specifications will be discussed each for the two Wilfone models.

Wilfone comes with two models namely X8i and M16. X8i is priced a little higher the key features are it’s a dual sim capability and a mobile TV. It is like a package phone in the sense that it is a music phone, has 2MP camera, wireless FM radio, a multimedia player. It has microSD card that is expandable up to 8GB.

M16 is also a dual sim phone and mobile TV but this particular model is capable of recording what is being telecast and also what is being played on FM Radio. If what you have recorded can be uploaded on youtube then that’s the coolest and probably the first of its kind. However, this particular Cherry Mobile phone only has a 1.3Mp camera. 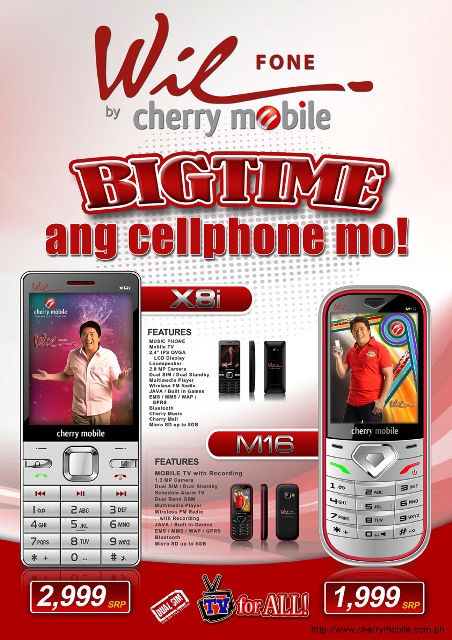 Next post: DepEd Suspends Classes (August 2) in Metro Manila and Areas of Calabarzon