TV5 News anchorman Erwin Tulfo exposed in his exclusive report that DepEd had bought desktop computers worth P400k per set. The department also bought textbooks that are overpriced which happened on 2008 – 2010 under the government of Gloria Macapagal-Arroyo.

Public schools often times are experiencing shortage when comes to classrooms and books. Students don’t have the right quantity of books that they are suppose to bring at home to continue learning and use to deal with their assignments. Most of the time our beloved teachers don’t get their hard earned salary on time and their bonuses are delayed.

Can you imagine what will happen to our children – the so called hope of the nation if all these things continue to happen? Sad, isn’t it? But whats even worse is that you will hear the news that on the year 2008 to 2010 the Department of Education (DepEd) did not use their budget the right way, like buying an obsolete Windows 98 desktop computer (with complete accessories) for Php400,000 per unit, and probably thousands of overpriced textbooks.

TV5 news anchorman Erwin Tulfo reported on May 29,2014 that DepEd allegedly bought Desktop computers with obsolete specs worth P400,000 each, and overpriced textbooks. 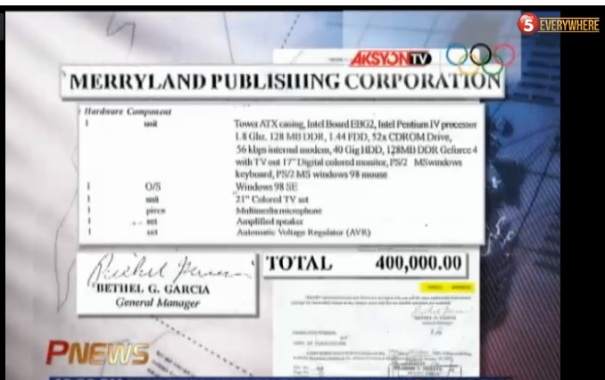 DepED P400K worth Desktop Computer Specs and other accessories

According to Erwin Tulfo these things happen because there two DepEd officials who were involve and are tolerating this kind of transactions. Watch the complete report below:

If DepEd had used the P400,000 the right way, it can buy 13 decent desktop computers worth 30K each at Gilmore IT Center in Cubao or eight 13” Macbook Pro in Kimstore or maybe twenty sets of 32inches Sharp colored TV in Lazada.

I hope that PNoy government would do something to stop these ill things to keep on happening.

Tagged as: department of education, deped