Disney On Ice will hold yet another dream-filled concert this coming December 25, 2014 until January 4, 2015. Dubbed as “Dare to Dream,” this year’s theme will allow every kids and adults make their dream a reality when they see their favorite Disney characters come to life once again.

Boys and girls would surely love to see Disney Princesses such as Ariel, Cinderella, Jasmine, Rapunzel, Sleeping Beauty, Snow While, and Tiana as they glide, dance, and do stunts on ice. They will also enjoy the magic and adventure of seeing Mickey and Minnie Mouse plus other classic Disney characters take the stage. 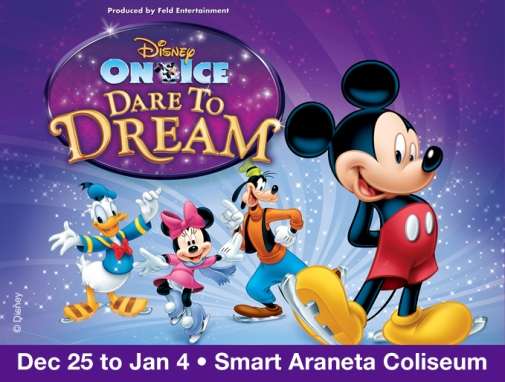 Note: All tickets are reserve seating except general admission

Disney on Ice tickets can be purchased online by visiting ticketnet.com.ph. They can call (02) 911 5555 for inquiries and other details.

As of the time of writing social commerce website Ensogo is selling Disney on Ice General Admission, Upper Box Regular, and Upper Box Premium tickets at a huge discount. However, the available schedules are December 29, 30, 2014 and January 2,2015.

Disney on Ice Dare to Dream was produced by Feld Entertainment. It is presented by The Araneta Center, Philippine Daily Inquirer, JAC, and Magnolia Chocolait.

How to get to Smart Araneta Coliseum

Those who would go there by public transportation, the easiest way is to ride MRT 3 then alight at Cubao station. Afterwards walk towards Araneta Coliseum.

Next post: Cherry Mobile Me and Me Fun Price and Specs