DTC will be holding an Inventory Madness sale this coming April 22 to 30, 2014. Four of their top selling android phones such as GT6 Jack, GT8 Bit, GT9 Pump and GT10 Bullet will be sold with up to P2000 discount depending of the chosen device. 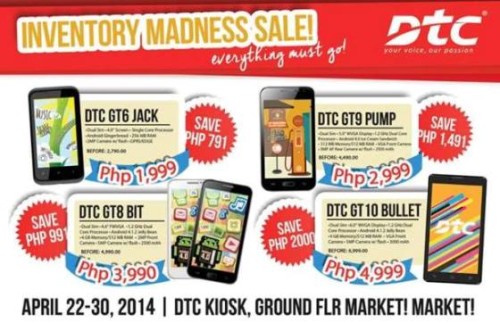 List of DTC Android Phones on Sale with Specs and Price

If you want any of the listed phones you can head to DTC Kiosks, at the ground floor of Market! Market! during the selling period. Those who won’t make it to the location doesn’t have to worry as according to information in DTC facebook page they will still have upcoming promo. However, there is no mention of where and when will the next DTC android phone sale would happen.

Next post: Kris Aquino in Short Hair (Photo and Video)