DTC has revealed three new android phones powered by Quad Core processor – The GT17 Jupiter, GT12 Nick Plus, and GT15 Fiesta. These three smartphones are almost identical with each other except for the display size, and battery capacity which is probably the basis for the difference in pricing. 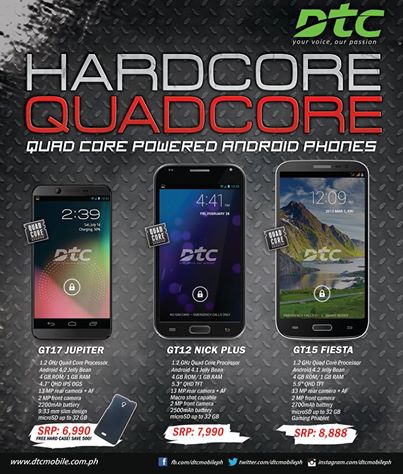 All these smartphones have enough processing power at 1.2GHz quad core and 1GB of RAM to execute games seamlessly and at the same time have apps running at the back end. There is also 4GB of internal storage that is expandable up to 32GB present in all these phones. This Just allows every user to store enough of everything; videos, music, photos, and android apps. The bigger display will just let the users enjoy viewing whatever they store on phone. The three phones are equipped with 13MP main and 2MP front camera for high quality photos and picture perfect super selfie.