Filipino domestic helpers / housekeepers will soon be able to work in Japan. Salary is around 1500 US dollars or PHP 66,000 per month, which is equivalent to the minimum wage in the said country.

After the bilateral meeting between Japan and the Philippines during the recently concluded Asia Pacific Economic Cooperation 2015 (APEC), Japan will soon be hiring Filipino domestic helpers / housekeepers.

Interested applicants should train domestic helper related courses for six months in TESDA and acquire a National Certificate (NC II). They should also learn the Japanese language (Nihongo) to have an edge during the application. Of course, experienced Filipino domestic helpers have a higher chance of getting employed. 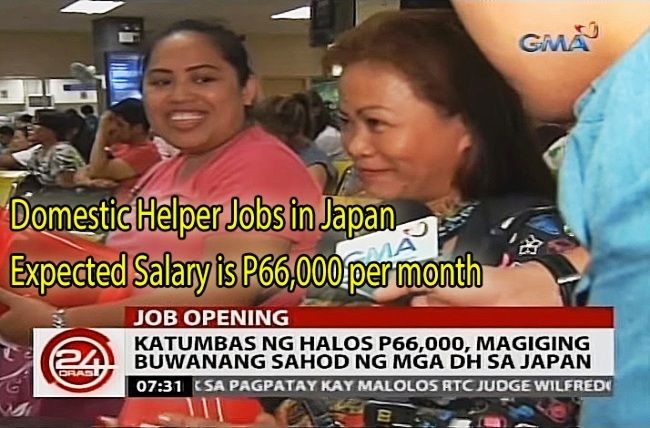 Those who will be hired will receive a salary equivalent to PHP 66,000 per month or US$1500 plus other employment benefits. The said salary is the minimum pay in Japan.
Watch the Video below for more details:

Japan is currently employing Filipinos as factory workers, hotel and restaurant staff, medical (nurses), and health care related jobs. But after the agreement between the Philippines and Japan is finalized, the latter will be employing Filipino domestic helpers to work on their country.

There is no definite number of domestic helpers needed in Japan, but according to POEA, they will announce it on their website once there is an update regarding this matter.

Based on the news report of TV Patrol on April 21, 2016. The guidelines for “Pilot Testing” are currently being fixed. Initially, there will be 50 to 100 domestic helpers that will be sent to Kanagawa Prefecture in Japan for the said Pilot Testing. According to POEA Administrator Sir Hans Cacdac, he sees this as another opportunity for Filipino workers to wok overseas.

The Philippine Overseas Employment Agency has reminded OFWs to apply only to accredited manpower agencies and verify through the POEA’s official website if the latter has available job orders for their offered job openings.

Domestic helpers especially Filipinos are preferred by employers in countries like Singapore, Hong Kong, Macau, Taiwan, Malaysia, and those in the middle east like Qatar, Dubai, Riyadh, Saudi Arabia, and Bahrain. Probably, because aside from know-how in household chores, they are also able to speak English, and show genuine care to their employer’s loved ones.

Next post: 30,000 Job Openings for Filipino Seamen from Royal Caribbean Cruises, Job Lists, and How to Apply (Video)