Yesterday my family went to SM San Lazaro to watch “Si Agimat at si Enteng Kabisote.” Unfortunately, weeks after its first viewing, cinemas still offer Standing Room only. So since we have with us our son, we decided to watch RPG Metanoia instead.

The movie was simple actually even a four year old just like my son could easily understand the plot of the story. Despite the simplicity, I had to admit that occasionally I have to hold my breath while watching the fight scenes of Zero/Nico together with his barkadas (friends) while they were inside the Metanoia. 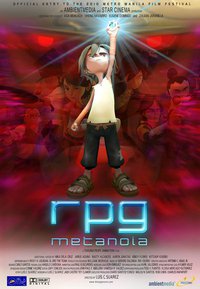 When it comes to quality, I thought that the whole movie was set in 3D. Sad to say only some portion or to be exact the 3D effects happen only when the scenes were inside the metanoia. Actually, you can even watch it without the use of 3D glasses because it is hard to distinguish, and almost no difference when it is in 3D and when it is not.

Another thing I also noticed that some characters are not changing their clothes during the entire movie. It is the same in both the real world and when they are in Metanoia/virtual world, which is quite unbelievable.

Though I’m not satisfied with its 3D effects as it was claimed to be the “first full-length 3D animated film in the Philippines.” For me, the film was acceptable considering that my son enjoyed watching it so much.

Also, I like the moral of the story that a boy like Nico should not spend most of his time playing computer games. Because he would end up becoming a clumsy boy as his muscle got weak due to lack of exercise and vitamin D from the Sun (I guess) hahaha. The movie may be incomparable with Hollywood-produced films in terms of budget and production, but I think this is a good start for the film industry in the Philippines. More power to the creators of this movie.

in Showbiz News
0
SHARES
Share This
5 comments… add one

Next post: 31+ My Amnesia Girl Movie Lines to Use on Your Crush