Foreigners from these 157 countries are allowed to travel to the Philippines without an entry Visa. These Foreign Nationals can stay in the country for 30 days or less for the purposes of tourism and business.

The Republic of the Philippines is becoming one of the top travel destinations for foreigners mostly for tourism and businesses. Some expats choose to stay for good in the country either because they’ve found their special someone, they enjoyed the warm weather, or for retirement.

Top Foreign Nationals that Travel to the Philippines

According to the Department of Tourism website, for the last 5 years, the number of international tourist visitors is continuously increasing. 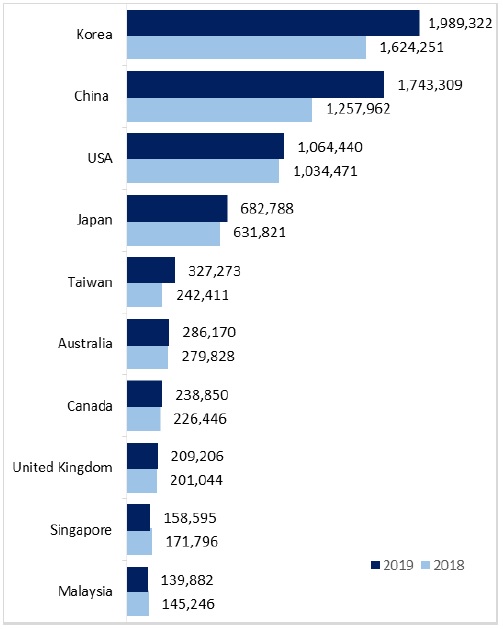 4 Reasons Foreigners Travel to the Philippines

The reason foreigners visit the Philippines can be because of numerous factors. The beautiful 7101 islands with marvelous sceneries and white sand beaches, the English-speaking locals that are hospitable especially to foreigners, mouth-watering food, and the low cost of living at least as compared to their origin country. The warm weather can also be a reason, especially for foreigners living in cold countries who wanted to have a change of environment.

When it comes to natural scenery, the Philippines has a lot to offer

The country has the longest subterranean river, The Puerto Princesa Underground River in Palawan. It was listed in the 7 wonders of the world in 2012.
The 2000-year-old Banaue Rice Terraces located in the Ifugao Province north of Luzon is recognized as the 8th wonder of the world. According to atlas.com.

The Mayon volcano of Albay in Bicol has the world’s most perfect volcanic cone as describe in Britannica.com. Its picturesque shape has made it popular to tourist, mountain climbers, and campers.

There are 1260 chocolate hills that are unique in Bohol province. Its color turns brown during the summer which is why it got the name “chocolate hills.”

The Philippines is an archipelagic country which only means that it has massive white sand beaches of course with clear waters. The country has Boracay island which was awarded as the best island in the world in 2012.

There is El Nido in Palawan, a paradise beach in Bantayan island of Cebu, Pagudpod beaches are popular to surfers, the province of Leyte has Kalanggaman Island known for its long sandbars. There is really too much to mention about this part since the Philippines has thousands of islands.

Also, when comes to feasts and celebrations, the Philippines has a handful of them. Foreigners can’t miss the Ati-Atihan festival in Kalibo Aklan, the Sinulog Festival of Cebu, and the Panagbenga festival of Baguio.

The Filipinos are very hospitable in general

I think by culture Filipinos love having a conversation with foreigners. Locals may evade the conversation at first in fear of “Nose Bleed” or fear of running out of English words to say. However, once they get along, the sky is the limit hahaha.

It is the reason foreigners are able to adjust easily and don’t feel homesick. Probably one way for us to practice our English speaking skills and also an opportunity to spread the Tagalog language to the world. Why? Because Filipinos love to teach Tagalog to expats hahaha.

Locals are proud when foreigners are able to appreciate the beauty of the country and are delighted when they hear expats speak in Tagalog. How do I know these? Because that is what I feel every time I hear foreigners speak Tagalog even for a bit.

Filipino cuisine is influenced by cultures from different parts of the world. Nearby countries such as Chinese, Malay, and Indonesia and the previous colonizers such as Spain and America have a fair share of contributions when comes to food that we commonly see on the table of Filipinos. Even the name of the country “Philippines” was named after King Philip II of Spain back in the 16th century.

Adobo is considered the national dish of the Philippines and is favored by many. Though I think the “sinigang” is not far behind hahaha. These two will always make it to the table during lunch or dinner for Filipinos. Variations of Lechon will always be present on the table during celebrations. Not to mention the ‘SISIG” which according to a world-renowned chef, is perfectly positioned to win the hearts and minds of the world.

Eating a Balut will always be an unforgettable experience for foreigners. Every major city in the Philippines have its own version of how they cook certain Filipino dish but surely, Foreigners will enjoy it.

The Philippines has a Low Cost of Living

The cost of living in the Philippines is low as compared to western and some other Asian countries. One US dollar is equivalent to 50 PHP. Imagine a 2.60 USD can buy you a decent meal in Jollibee a prominent fast food restaurant in the Philippines. The food cost will be even cheaper if foreigners will prefer to eat at the usual “carinderia.” 1 rice and 1 dish would probably cost 100 pesos or 2 USD or less.

Foreigners can rent a studio or 1 bedroom condo for 500$ / P25000 pesos per month in an upscale location like Bonifacio Global City (BGC) in Taguig. A quick search at lamudi.com.ph will show condominiums with a rent within that range.

If expats have 1000 US dollars budget for a month, they can thrive or at a minimum, survive their monthly expenses, and live worry-free. Come to think of it, it’s roughly 12000 USD or roughly 600,000 pesos per year.

Out of 197 countries in the world, there are about 157 countries whose foreign nationals can enter the Philippines for a certain number of days without the need for a visa. 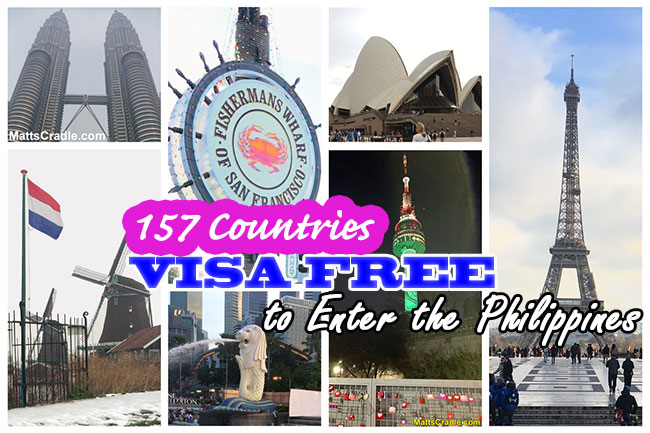 Below is the list of countries whose Foreign Nationals are allowed to enter and stay in the Philippines for 30 days or less for Tourism and Business purposes. These expats do not need to apply for visas.

Provided the latter has a valid return ticket from their country of origin or has an air ticket for their next travel destination. Also, their passports should be valid for at least 6 months beyond their planned period of stay in the Philippines.

12 Countries in the Caribbean

9 Countries in the Middle East

*Only foreign nationals from Brazil and Israel can visit the Philippines for 59 days without a visa based on the existing agreements between countries.

If you are a foreigner from the countries not listed above, you have to apply for a visitor visa to travel to the Philippines.

How to apply for a Philippine Visa for Foreigners?

Previous post: What Network is this Mobile Number in the Philippines? Check Here!