Epic: Guy Walks 8 Kilometers in Heels for P500, Here’s What Happened Next

This is the viral video of a guy who accepted the challenge to walk 8 kilometers in heels from Ortigas to Ayala. Youtube user Mark E published a video on November 3, 2014 about the walking challenge.

In the video, the videographer challenged several men to walk from Ortigas to Ayala for Php 500. At first, many agreed to do the task however when the videographer told that they would walk that long distance while wearing high heels, they all backed out except for one brave guy. It seems that those who backout do not think the amount is enough for their effort (which everyone can understand).

Maybe if the interviewer has raised the amount to Php 1,000 or Php 1,500, everyone will have the second thought or the majority will accept the deal to walk on heels. The guy I supposed who has the ‘will’ to do it is Mark E since he used as profile image the photo of the guy who accepted the challenge.

Before the walkathon challenge started, the guy purchased heels that fit him in the Payless Shoe store (with reference to the paper bag). Outside the store, he replaced his sneakers with the new heels, and the 8 Km walkathon begins. Based on my estimate, the heels is 1.5 to 2 inches tall. 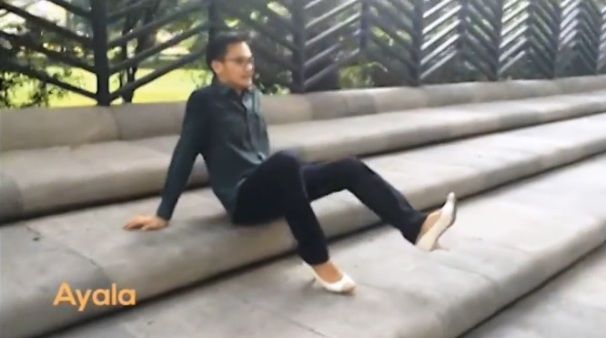 Near Buendia/Gil Puyat, he told that he still feels Okay though his ankle is already a bit sore. In the video, after the Guadalupe area, his toe area started to show some bruises.

The videographer captured instances where the guy had a hard time balancing while going down the stairs. At some point, he was also filmed while pushing a fishball cart cheerfully. Finally, in the Ayala area, he sat on the sidewalk to take a short rest.

Watch the viral video below:

In the end, the guy was able to complete the challenge. When asked if the P500 is worth it, he told that it should be Php 1000. But then he seemed happy with it probably because first, he has the heart to accept the challenge and second was able to conquer it.

The few remaining seconds of the video is dedicated to commending the ladies who walk in heels every day (for free) while going to their workplace. It comes with the caption “Much Respect Ladies, Much Respect.”

Now at least one male was able to experience walking for a very long distance (like 8KM) on the shoes of a female. He now understands the effort every ladies out there make while they walk in heels to get to their daily travel destination.

One of the youtube commenters asked the purpose of the video. He replied that it’s about experiencing “female stuff” from a man’s perspective.

The walking challenge has attracted lots of comments from the viewers. Most of the commenters gave positive remarks with what the guy did in the video. Some ladies adore the guy for taking the effort.

Based on research walking offers lots of health benefits to the one doing it; it can lower the risk of heart disease, it can tone down legs, improves balance, improve cardio and lung fitness, and many more. Aside from all the benefits sometimes you can also earn Php 500 in just two hours by doing an 8Km walk challenge :-).

How about you? If given a chance, would you accept the challenge? As for me, why not?