How to get new BDO ATM card? Is the first question I had in mind when my six-year-old Equitable PCI ATM card got captured by an automated teller machine several days ago.

I am about to withdraw thousands to buy myself an iPhone 5 on kimstore when unfortunately, the incident happen for reasons I do not know.

Since, I will not be able to retrieve my antique ATM card (because it is captured in an ATM not attached to a BDO bank), I decided to call BDO hotline number 631-8000.

The first thing that the customer service representative did is to block my captured ATM card. Basically just to make sure that no one can use it even when it is retrieved.

He afterwards explained that I have to visit BDO branch where I open my account to get new ATM card. Also, the customer agent told that I have to bring two valid ID and payment of Php 120 for the new card.

Valid IDs include Passport, NBI and police clearance, voter’s ID, driver’s license, company ID, school ID, SSS card, Philhealth card, and government IDs that have your complete name, picture, and signature can be found on it. 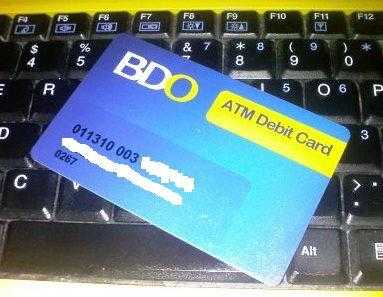 There are two types of card one is generic type and the other is a personalized ATM card. The difference between the two is, generic card can be acquired within the day the downside though, when captured again (hopefully not) there is no way for me to retrieve it.

Personalized ATM card (customers name embossed on it) on the other hand is obtainable after five working days. This type of ATM card is retrievable when accidentally captured by machine attached to the bank. I wanted to choose the personalized type but I need the card immediately so I chose the generic type.

Update:
Last November 5,2013 my new BDO ATM card was again captured by ATM attached to BDO bank. Good thing I was able to get it back immediately.

I just told them a very honest reason that I need to retrieve it because I will go abroad on that same day and will be using it to withdraw cash overseas.

in Educational Materials
3
SHARES
Be The First to Share with Your Friends - Its Free!
3 comments… add one

Next post: The Best Printer in the Philippines is HP All-in-One Printer