Smart Communications sweethearts, James Reid and Nadine Lustre performs ‘Text Me Merry Christmas’ perhaps to show to their fans how they can make their love one’s Christmas extra special this season.

Smart Communications uploaded a video in Youtube on December 13, 2014 featuring love team JaDine. The two perform ‘Text Me Merry Christmas’ a music video that tells how to make the holiday greetings more personal and warmer by simply sending text messages to loved ones. At some point, it also tells about the difference between personalized text messages from status update, tweets and a Facebook post. 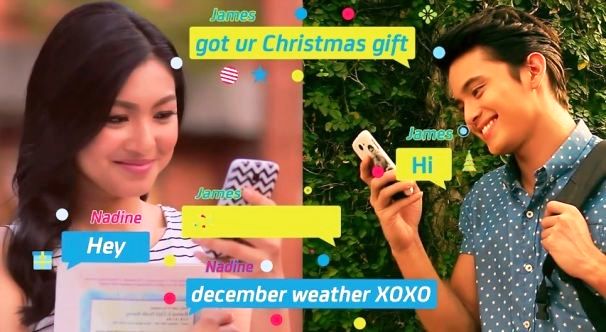 Those who were able to watch the video on Youtube has nothing but positive remarks, telling that the two really have talent in singing. Some were amazed with Nadine Lustre’s voice because they are surprised that the latter can sing at such a high note.

Nadine Lustre (21-year-old) and James Reid will be teaming up again for three upcoming movies this 2015 titled ‘Para sa Hopeless Romantic,’ ‘Never Talk Back to a Gangster,’and ‘Diary ng Panget 2.’ The movie ‘Para sa Hopeless Romantic’ will be top billed by Shy Carlos, Inigo Pascual, Julia Barreto, AJ Mulach, and JaDine. ‘Never Talk Back to a Gangster’ will be top billed by Jospeh Marco, James Reid, and Nadine Lustre. The ‘Diary ng Panget 2’ will also be topbilled by James Reid and NaDine Lustre.

Nadine has received two awards this year (2014); Female Star of the Night from PMPC Star Awards for TV 2014, and Pop Female Cutie from ASAP Pop viewer’s Choice Awards. She is the cover girl of Candy Magazine for December 2014.

James Reid also has received nominations and awards from award giving bodies this 2014. It includes German Moreno Youth Achievement Award from 62nd FAMAS Awards. He is the newest prepaid endorser of the leading telecommunications company in the Philippines, Smart Communications.