James Reid serenades Vice Ganda during the August 17,2014 episode of Gandang Gabi Vice. James Reid sings “All of Me,” one of hit singles of John Legend. 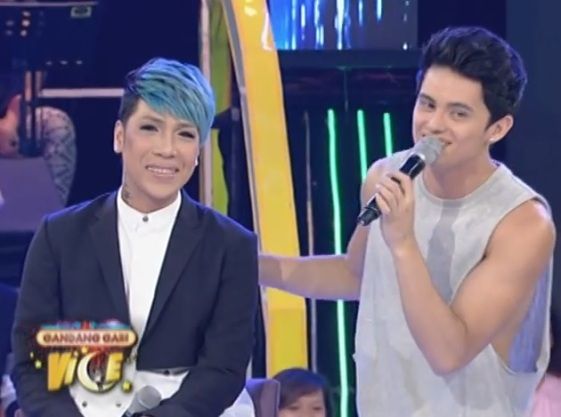 JaDine love team, Nadine Lustre and James Reid guest on the August 17,2014 episode of Gandang Gabi Vice probably to promote their upcoming movie “Talk Back and You’re Dead.” During the interview “All of Me” were played as background song. The audience immediately chant “sample, sample” requesting James to sing the song. Fortunately, James is game enough to do the challenge.

Watch James Reid sings “All of Me” replay video below

Vice Ganda revealed that he was not a fan of the PBB Teen Clash 2010 big winner but after he sang the song, the former became an instant fan.

James Reid and Nadine Lustre will be teaming up again in “Talk Back and You’re Dead,” the film adaptation of best selling book of the same name. It will be hitting the cinema screen on August 20,2014, directed by Andoy Ranay.