Junrey Balawing is the Shortest Man in the World, Pictures and Video

Who is the Shortest Man in the World?

Meet Junrey Balawing, the shortest man in the world according to Guinness World Records. He is a Filipino, born and raised in Zamboanga del Norte Philippines. As of this writing, he is 17 years old with a height of only 22 inches or just equivalent to 2 stacked 1-gallon water jugs.

Based on the description, Junrey is currently as tall as a 1-year-old baby. His behavior and actions are also comparable to the latter.

He is shorter by 4.4 inches than the current titleholder of the “Smallest Man in the World” Khagendra Thapa Magar of Nepal, who stands 67 cm or 26.4 inches.

Junrey will set to become the smallest man in the world once he turned 18 this coming June 12, 2011. 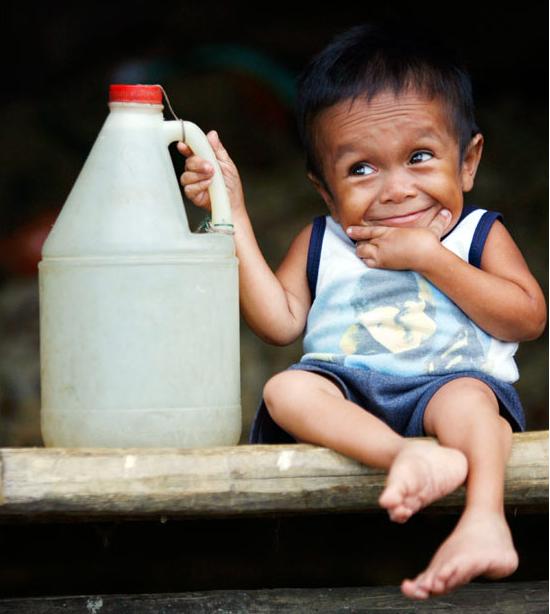 Junrey Balawing was born on June 12, 1993, in Sindangan, Zamboanga del Norte. He is the firstborn child of 4 siblings. However, he is extraordinary in terms of physical features if compared to his siblings.

He is already 17 years old but still has an appearance and behavior similar to a baby. According to his parents, he was normal at birth but he stops growing after reaching 1 year old. He was featured on ABS-CBN’s TV Patrol though I don’t know when it was aired.

Watch the Shortest Man from the Philippines in this video:

As of June 12, 2011, to present, Junrey Balawing holds the title of the “Shortest Man Living” under the non-mobile category of Guinness World Records. It is confirmed on his 18th birthday is on June 12, 2011. His average height is 59.93 cm or 23.6 inches based on six measurements taken at the health center in Sindangan, Zamboanga del Norte in the Philippines.

According to Guinness World Records, the shortest man ever is Chandra Bahadur Dangi of Nepal. His height is only 54.6 cm or 21.5 inches. It is equivalent to 6 stacked cans of baked beans.

On the other hand, as of December 16, 2011, the shortest woman living under the “mobile” category is Jyoti Kisanhi Amge of Nagpur India. Her height is 62.8 cm or 24.7 inches.

*Photo and video credits to the owner

Previous post: Mara Clara: A Parody of the Death of Mara