Karylle Padilla got a chance to meet Marian Rivera in ABS CBN noon time variety show “It’s Showtime” on March 2,2013. She met not the real Kapuso Star, but one of contestants in their celebrity look-alike segment “Kalokalike.” 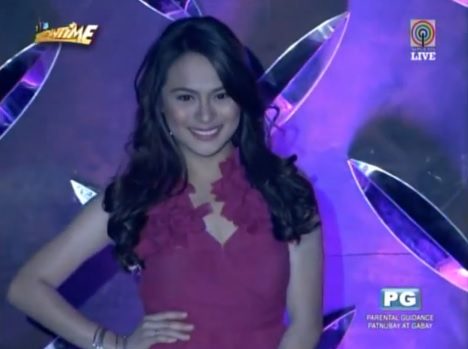 Unfortunately, Jefferlyn lost to Allan K’s impersonator. According to celebrity judge Jacklyn Jose the contestant was really Marian’s look-alike and she gave positive remarks like “You’re good” (ang galing mo) however, there seems a problem with the result since latter’s verdict is Kaloka.

I do not know if this is the first time Karylle Padilla meet her rival to former boyfriend Dingdong Dantes. But from the looks of it, it seems that Karylle still haven’t moved on from split up to previous relationship. Or just that she is not used to getting along with the Kapuso Star. One way to confirm my observation is when the look-alike of Dingdong Dantes becomes one of the contestants. I also wonder what will be Karylle’s reaction if the contestant would bring promise rings for couples when he visits the show.