The stars of the Twilight Saga movie, Kristen Stewart, Taylor Lautner, and Robert Pattinson have their handprints and footprints being immortalized. The event takes place just outside of the Grauman’s Chinese Theatre at the Hollywood walk of fame on November 3, 2011 (Eastern Time).

The three Hollywood actors seem excited at the same time overwhelmed and shocked. Looks like they did not prepare a speech. This is based on what Kristen Stewart has said: “Nobody said we have to make a speech or anything.”

The three gave their thanks to the renowned American novelist and best-selling author, Stephenie Meyer. For those who do not know, the woman is the brain behind the four vampire-themed fantasy novels. They also thanked the avid followers of Twilight Saga.

Kristen Stewart (Bella Swan) begins her speech by thanking the author of the novels. According to the actress, Stephenie is amazing. She also added that Hollywood (or being an actress) is the coolest thing that she has ever done in her life.

Tailor Lautner (Jacob Black) starts his speech by thanking the supporters and fans that show up at the event. He added that their support is unreal and they will not be where they are if not because of them. Robert Pattinson also thanked the fans. He also said that it’s an incredible honor, ridiculous, and at the same time amazing. Edward Cullen suggests to their fans that they should also have their hand imprint together with them.

I think what’s really noticeable is the outfit of the actress’ Kristen Stewart. She initially wears high-heeled shoes, but she eventually changed to vans sneakers during the actual footprinting process. 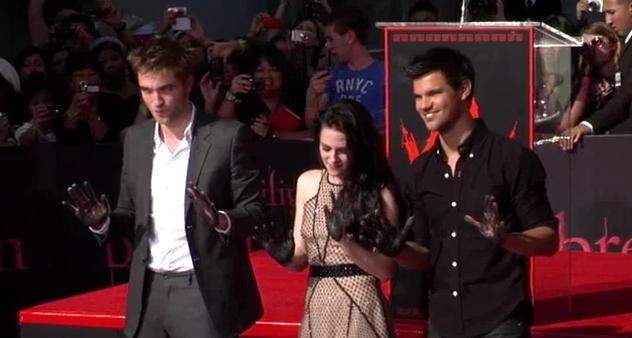 The American TV host Jimmy Kimmel officiated the ceremony. The event lasts only for 16 minutes. If you missed the Twilight Saga Stars Handprint and footprint ceremony you can watch the replay below: