The number one pound for pound fighter Manny Pacquiao showed up wearing a red jacket in an interview at Jimmy Kimmel Live and as expected fans go wild.

He’s been on that seat for the fifth time now and according to Jimmy every time he had his interview with Manny the latter always win the fight. 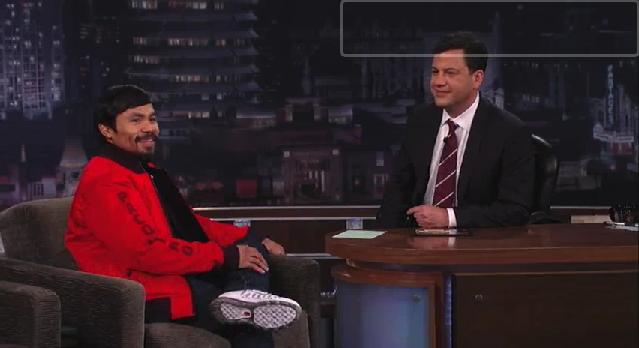 The interview was all about Pacquiao – Marquez III upcoming fight this November 13, 2011 pacific time. This probably the final battle between the two fighters and the speculations that Marquez beat Pacquiao twice will finally come to an end.

Some part of the interview was about Mayweather – Pacquiao match up where Jim had a suggestion that whoever wins the fight all the money will be given to the winner.

The two-minute interview ended with a duet of Bee Gees popular hit “How deep is your love.”