GMA 7 Primetime Queen Marian Rivera angered by the two Sons of Sugod Bahay winner during the August 19,2014 episode of Juan for All All for Juan in Eat Bualaga. 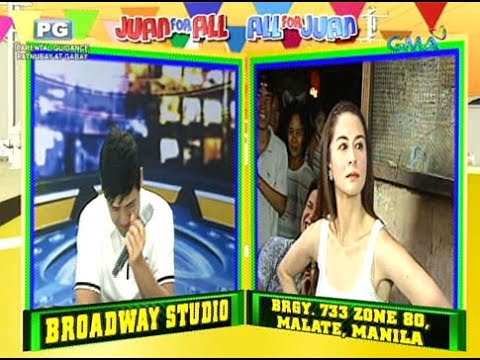 Marian Rivera cannot contain her feelings during Eat Bulaga’s Sugod Bahay that took place at a village in Malate Mania. She was interviewing the lucky SB winner, a 73 year old Mother named Precila, who despite the old age, still has to work as “Labandera” to support her family. Marian was angered due to the fact that Precila has 3 sons, two of which have no work and have vices.

For those who don’t know, Marian Rivera is very family oriented. She is a self-confessed Lola’s girl and bffs to her mother. She values them so much that whenever she had time, she would spend it with them. This is probably the reason why she reacted that way during the Sugod Bahay segment.