Some footage was then included in the music video of their latest song ‘Sugar.’ The latest MV was uploaded on Maroon5Vevo Youtube account on January 14, 2015. 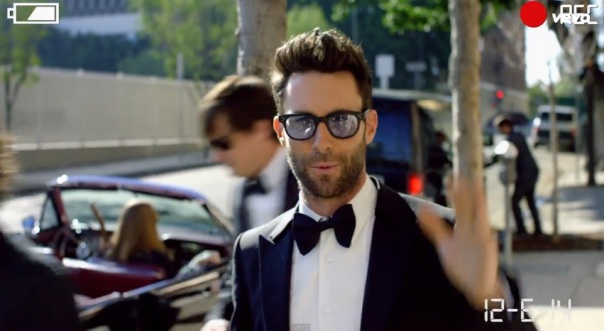 “It’s December 6,2014, were gonna drive across LA and hit every wedding we possibly can.” “It’s gonna be awesome.” – Adam Levine

Watch Maroon 5 as they crashed weddings

In the video, Maroon 5 dressed in a suit, drive around LA to visit several wedding receptions to have a surprising live performance in front of the newlywed couples and guests.

The usual setting is, there is a group, perhaps Maroon 5’s assistants to set up a white curtain to cover the stage where the band will perform. Maroon 5 would then sneaks on the stage to set up their equipment. The curtain will drop and the band’s performance begins.

According to reports from ETonline, Maroon 5 collaborates with the director of the 2005 movie ‘Wedding Crashers,’ David Dobkin to shot the music video. The music video of ‘Sugar’ was filmed in a full three-day weekend in LA where the band has to put 10 to 12 hours of travel per day for the video.

Maroon 5’s representative told ET Online that only the groom knows about the performance. They are not sure if the groom disclosed it to his bride or to the guests. The representative added that some parts of the music video like Adam Levine’s solo performance have to be recorded separately due to time and space constraints.

As of the writing, the music video of Sugar which was uploaded on Youtube on January 14, 2015, already has 3 Million views, 110 thousand likes, and almost five thousand comments.

There are also speculations online that the video where Maroon 5 crashed wedding events has been staged for the sake of the MV, but then some netizens told that staged or not the video is still brilliant and inspiring.

Some fans of the popular American pop-rock band commented that they will welcome Adam Levine and the rest of Maroon 5 to crash their wedding for the surprise performance.

Maroon 5 has an upcoming concert for 2015 in North America with Rozzi Crane, and in Europe with Nick Gardner. Tickets for the said concert are now on sale on the band’s official website maroon5.com.