Maynilad has released their schedule for the upcoming water interruption in some parts of Metro Manila (Manila, Caloocan, Malabon, Navotas, Makati, Pasay, Las Pinas, Muntinlupa, Paranaque) and nearby provinces such as Bacoor, Noveleta, Imus, Kawit, and Cavite City. The said service disruption will take place during the holy week this April 2014. Some areas will have to endure three days of no water supply, while others have to experience two days, and one day.

According to Maynilad, DPWH will address repeated flooding in Metro Manila by constructing interceptor drainage box along Blumentritt Street. However, the said culvert will cross Maynilad’s water pipe line located in the streets of Juan Luan and Hermosa in Manila. Prior to implementation of DPWH’s project, the said pipelines are needed to re-align and would require 72 hours to do so. Furthermore, MWSI management advised the consumers in the affected locations to store enough water during the span of service disruption.

Please find below the locations with water supply disruption 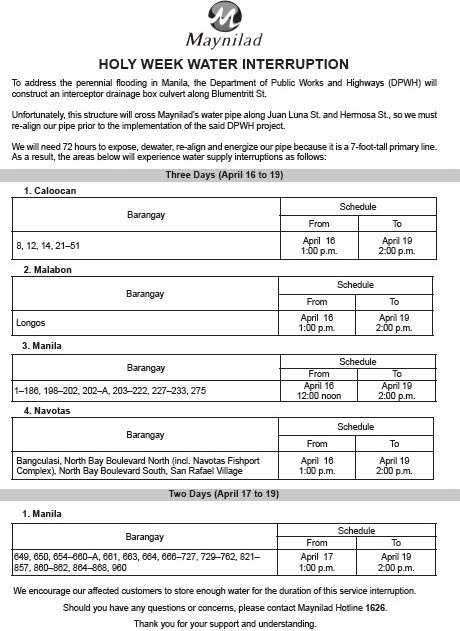