How to Go to Nami Island from Seoul?

In this post, I will share with you how to go from Insadong Seoul to Nami Island by bus, ITX-Cheongchun train, and Ferry. This option is like the budget version to get to Naminara Island, one of the popular tourist attractions outside of Seoul, South Korea.

To give you a little background about Nami island, according to Wikipedia, it is named after the Korean General. It is, where the “Winter Sonata,” a popular Korean TV series was filmed in the early 2000s.

Nami Island is popular with tourists because of its landscape, where the alignment of trees is very visible. Aside from that, the trees change the color of their leaves depending on the Seasons. For example, in Summer, the leaves are colored green, in Autumn it is colored red, and they turned yellow during Spring. Being the film location of a popular Korean TV Series is also a plus.

There are various ways to get to Nami Island. First, you can avail of the tour package such as guided tours offered online by popular travel agencies. Second, is get there by public transportation.

If you want more adventure, you can go to Nami island on your own using different public transportation. The advantage is you can arrive early to Nami, maybe a few hours ahead of the crowd that availed the travel package. It is also a lot cheaper and is not time constraint.

According to online, Nami Island is busy every day from 12nn to 2 pm. If you arrived early, you can get the chance to have a selfie or groupie picture at a popular location on the Naminara island. Such as the Winter Sonata film location and any other nice spots.

A little reminder, what I am going to share with you here is just based on my DIY travel experience on how to get there. You can read another post online for other travel options.

This post will cover the second route. You can also take the Subway instead of the ITX Train. I choose to go to Nami Island by ITX train because it is faster. It only stops at specific train stations. ITX stands for Intercity Train Express.

From Insa-dong, Jongno 3-ga bus stop is less than 10 minutes walk. The interval time for Bus 720 arrival is less than 20 minutes. You can use your T-Money Card to pay for this ride. The fare for the bus is 1200 South Korean won one-way. 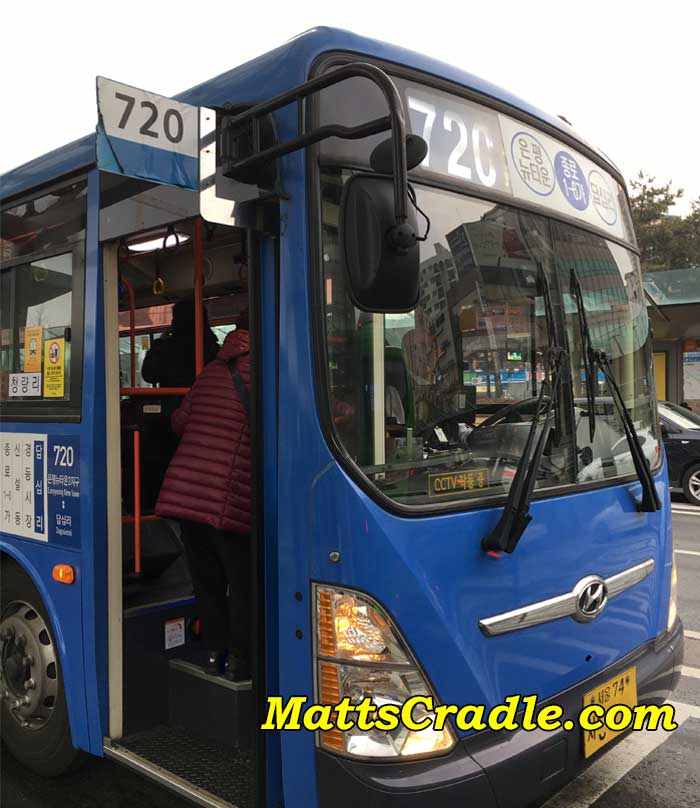 From the bus stop, the walking time to get to the train station is less than 5 minutes. 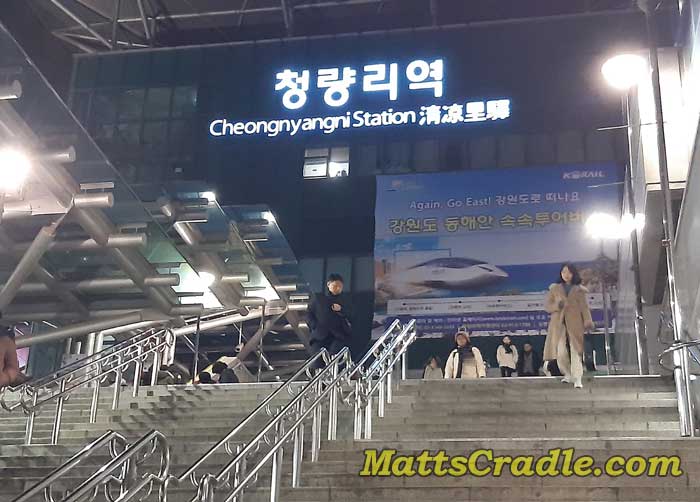 Step 3: Buy a Ticket at the ITX Train Station or pre-book a ticket online

If you pre-booked your ticket online at http://www.letskorail.com/ebizbf/EbizBfTicketSearch.do, there is a chance that you can have a reserved seat.

We just walk-in at the Cheongnyangni Station and bought the ticket at the counter. We get a “Standing Only” ticket because, at that time, it is the only one available for us. According to the staff at the ticket counter. 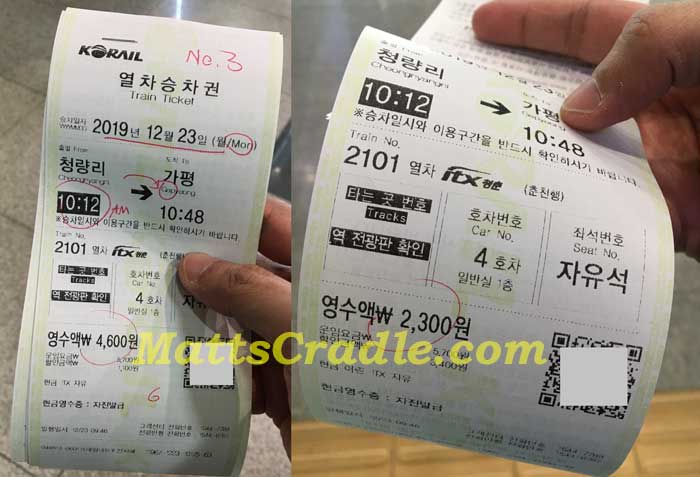 The good thing though, is that during our ride, there are available vacant seats on the train for us as pointed out by the train conductor. 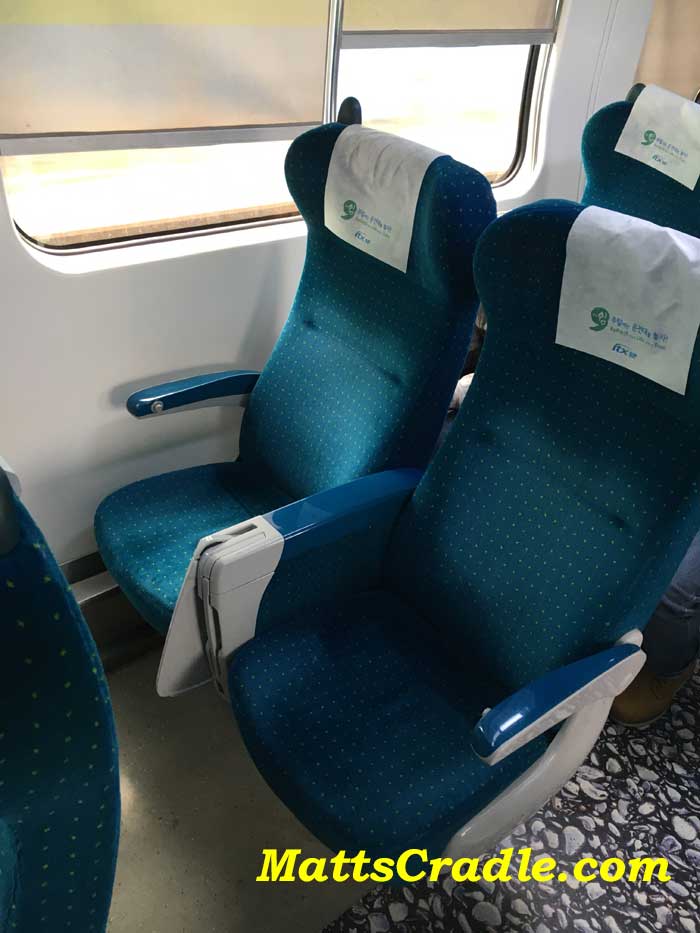 Step 4: Ride the Gapyeong City tour bus or bus number 33-5 to get to Nami Wharf 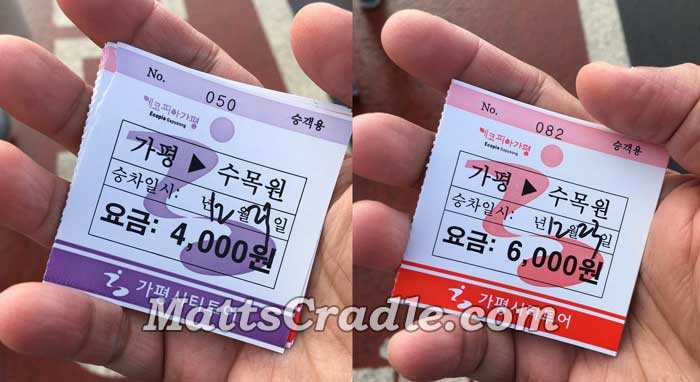 Probably, bus 33-5 is a lot cheaper. However, in our case, we chose to ride the Gapyeong City tour bus to get to the Naminara island. 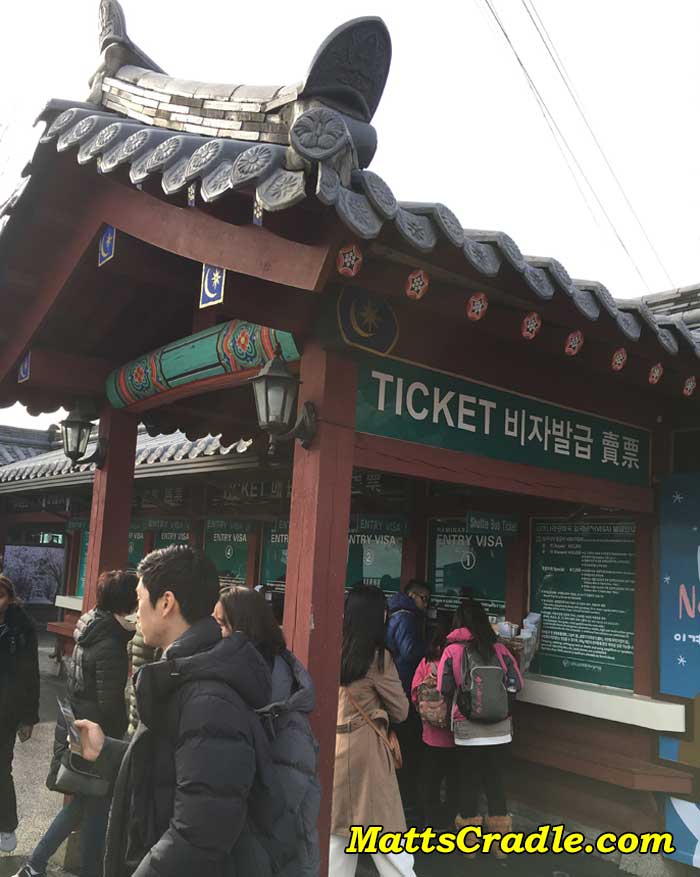 This is applicable if you will be traveling from Seoul South Korea by commute. You can use this as your reference. Add an extra budget per person, if you will buy souvenirs and stuff on the island. Here is the list of expenses:

How much is the Entrance fee for Nami Island

The cost for the Zipline ride plus the entrance fee is 44000 South Korean won. 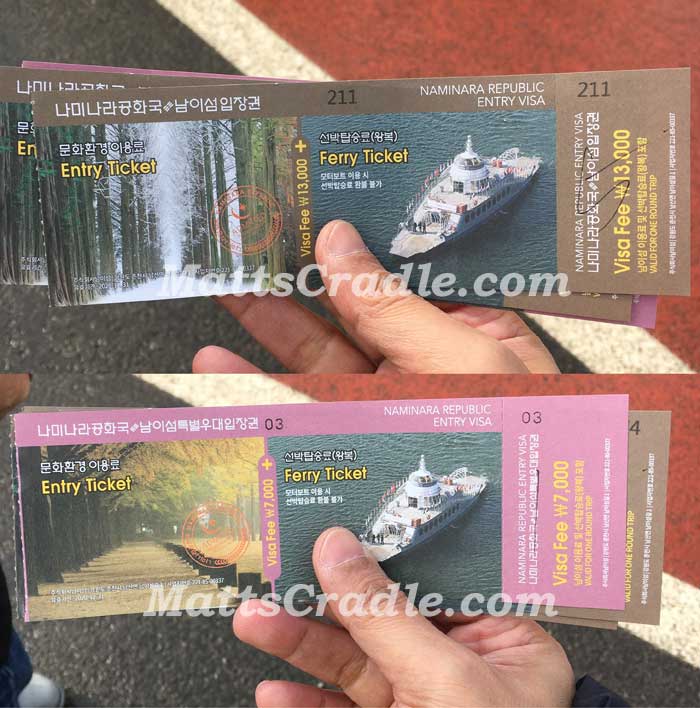 How long is the traveltime from Seoul to Nami Island

Based on my experience it is around 1 hour and 30 minutes plus-minus depending on the waiting time for the arrival of the bus and train.

Does it snow on Nami Island?

It is roughly 6 to 8 minutes excluding the ferry waiting time at the wharf. If you take the Zipline, you will be hanging in the air for roughly 90 seconds to reach the island. 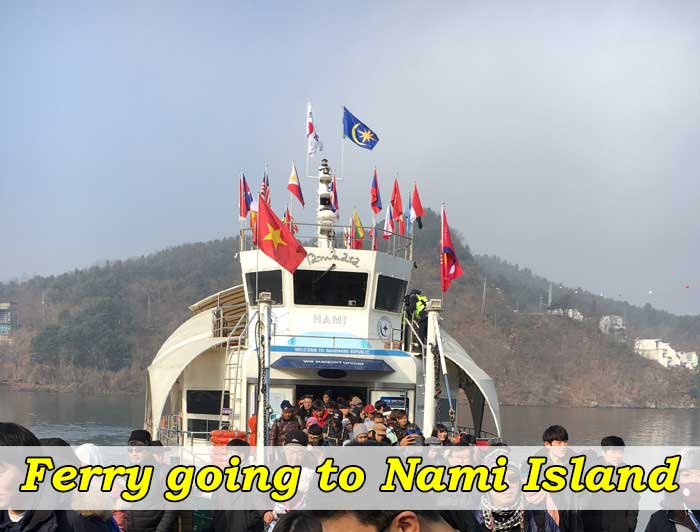 No, it is not possible as there is a separate ticket for the ITX Train which you can purchase at the respective train station. 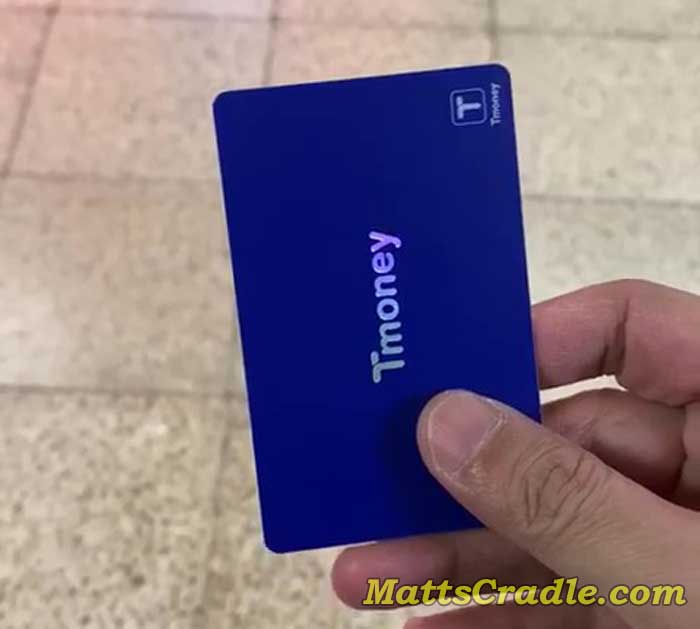 How far is Gapyeong Station from Nami Island?

It is about 5 minutes bus ride, according to the bus conductor of the Gapyeong city tour bus. From the latter’s train station, it is the first stop of the city tour bus.

How many hours should I spend on Nami Island?

You can spend 2 to 3 hours of your time enjoying the whole place. Explore the place like you are walking in the park without the need to hurry.

*There you have it guys, I hope this helps

Next post: How to Apply for Tourist Visa for South Korea in the Philippines