These are the list of countries that prohibits the collection of Placement Fees for their incoming Foreign Workers.

OFWs can consider these countries when applying for jobs bound for overseas so they do not have to worry about where to get the budget for the placement fees.

Here is what we know so far about the list of countries that has no placement fees for Overseas Foreign Workers.

NZ has the Wage Protection Act of 1983 which states that New Zealand prohibits the collection of placement fees or premium fees to any person in exchange for employment or for retaining employment in their country.

Meanwhile, The Embassy of the Republic of the Philippines in Wellington New Zealand has released an Advisory number JSD-2018-19 on November 23, 2018, reiterating that New Zealand still prohibits the collection of placement fees.

The Embassy released the advisory due to reports that numerous OFWs are charged with placement fees. It is done either by their licensed manpower agencies or employers in exchange for employment in New Zealand. Furthermore, the Embassy advises Filipinos to report such occurrences to them. 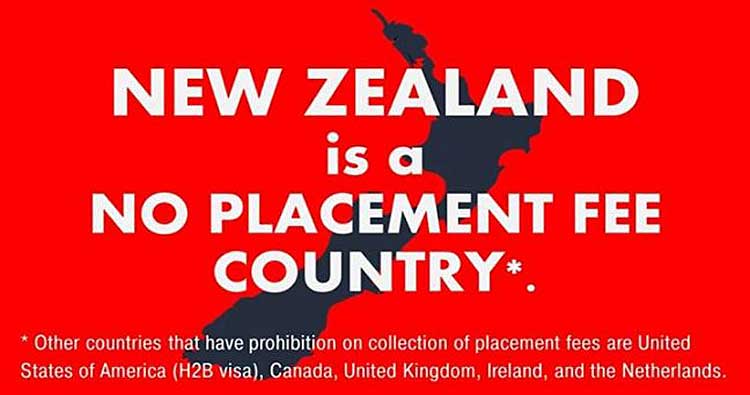 Canada is another no placement fee country. The Philippine Overseas Labor Office (POLO) Toronto branch released a public advisory on October 12, 2022, through its official Facebook page.

The advisory is a reminder to aspiring Overseas Filipino Workers that Canada is a “no placement fee country.” The labor office also explained that Canadian employers are the ones who will shoulder the expenses incurred during the recruitment process of foreign workers bound to Canada.

The United States of America under H-2B Visa Category

The United Kingdom is another country stated by POEA as a no placement fee country. According to nidirect.gov.uk, recruitment agencies are prohibited from charging placement fees (except in the entertainment industry) in exchange for finding or trying to find a job for foreign workers.

However, the website states that the agency may charge the job applicant for other offered services such as training, and transport. That is if the applicant availed them. Nonetheless, when applicants availed of such services. The recruitment agency has to provide the applicant with the complete details of the services. The agency also has to inform applicants that they can cancel it as long as they notify the agency.

According to POEA/DMW, Ireland is another country that prohibits the collection of placement fees for Overseas Foreign Workers.

The Netherlands is on the list of no placement fee countries. This is based on the POEA News Release for August 2010, and also in the News Advisory for December 2014. It is Irish employers who will shoulder the cost of both the recruitment services and the placement fee.

According to the www.ilo.org document titled “A global comparative study on defining recruitment fee and related costs” page 50. It states that The Netherlands is one of the European Union (EU) countries that prohibits Private Employment Agencies (PEAs) from charging placement fees to workers.

*I hope this helps.

Next post: How to Go to IPAMS Agency, DMW POEA License Status

Previous post: How to Go to POEA/DMW Main Office in Ortigas, Mandaluyong