Eat Bulaga I think now focus on promoting O+ Plus 9.7 Pad with price of P9995 after their successful plug of O+ plus Air shuffle wi-fi phone.

If you always watch the noon time variety show you will notice that O+ 9.7 Pad is always part of their segments. It is being used as a scorecard for their “Pambato ng Videoke,” also as prize for their Kaliwa O Kanan (Left or Right) and Mr. Pogi. 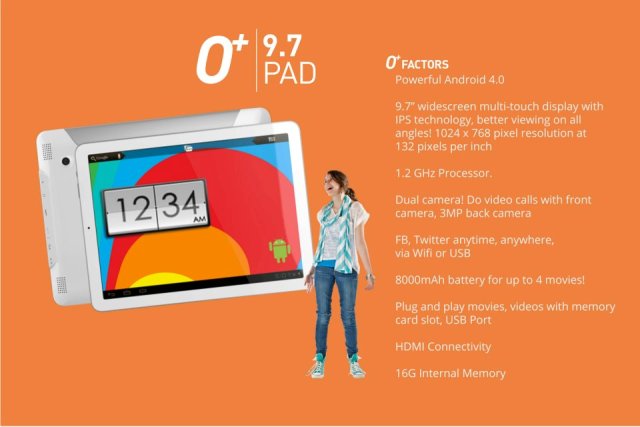 O+ plus 9.7 Pad at a glance has huge resemblance with Apple’s New iPad, but don’t be misinformed the tablet runs on android OS.

The Pad has 9.7-inch multi-touch (capacitive) display with 1024 X 768 pixel resolution at 132ppi. It is run by 1.2Ghz processor and powered by 6000mAh battery. It has front facing camera and 3Mp rear camera for video call and recording.

It has pre-installed social networking sites such as Facebook and Twitter which users can connect online via WiFi and USB 3G dongle. Users can also link their pad with TV through HDMI.

Based on their website O plus pad has two variants the first mentioned, and 0+ 7.1 Pad. However, it seems that the latter won’t be available locally yet.