October 31,2014 is not a Holiday in the Philippines

October 31,2014 Friday, is not a Special non-working holiday in the Philippines. It is not included in the released list of National Holidays for 2014. Read on in case you want to know the details proving the said date is not a holiday. 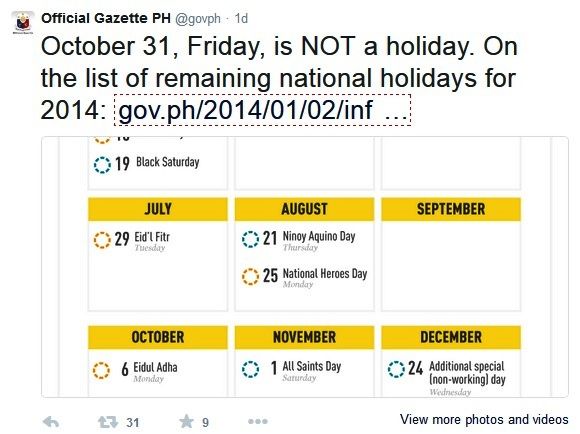 The public journal and main publication of the Philippine Government, Official Gazette (@govph) tweeted on October 27,2014 that October 31,2014 is not a holiday. It also requested the public to view the remaining holidays for 2014. 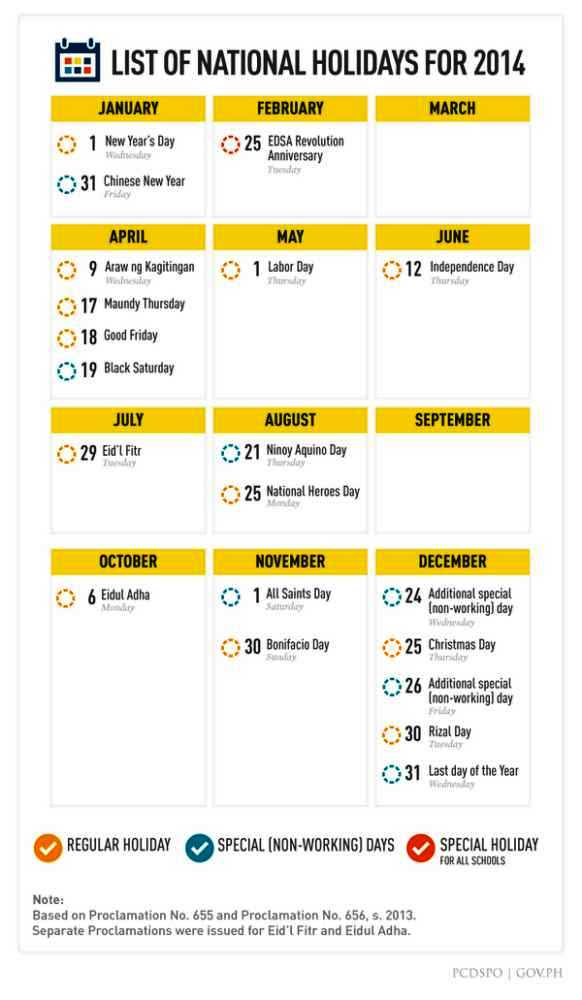 Due to this matter, working professionals who will be going home to different provinces to celebrate ‘All Saints Day’ have to make the necessary adjustments.

Despite the said announcement, Official Gazette tweeted that the number coding will be lifted in Metro Manila, which includes Makati and Las Pinas on October 31,2014. This is perhaps in preparation for November 1,2014.

Those who will be working on November 1,2014 (Saturday) which is a Special (non-working) holiday will received compensation equivalent to [(8 hour rate x 1.5) + COLA] for that day. Visit DOLE.gov.ph for the complete list of pay rules.

The remaining holidays for 2014 are as follows:

Meanwhile, some Facebook users are sharing a news article with title ‘Palace declares Oct. 31 a holiday.’ However, if will only give false hope to the readers as the article was published on October 11,2011.

For this year, Malacanang did not declare October 31,2014 as holiday but lifted the number coding in Metro Manila.

in Philippine Holidays
0 comments… add one

Next post: Malacañang: Half Day Work in Government Offices on October 31 2014