President P-Noy has declared October 6,2014 Monday a regular holiday throughout the country in observance of EIDUL ADHA (Feast of Sacrifice). It was released thru the Proclamation Number 875 on September 16,2014 Tuesday.

The Philippines is expecting another long weekend this coming October 2014 as President Benigno S. Aquino III has declared October 6,2014 Monday a holiday to observe one of the two greatest feasts of Islam – Eidul Adha or Feast of Sacrifice.

Read the Proclamation No 875 below: 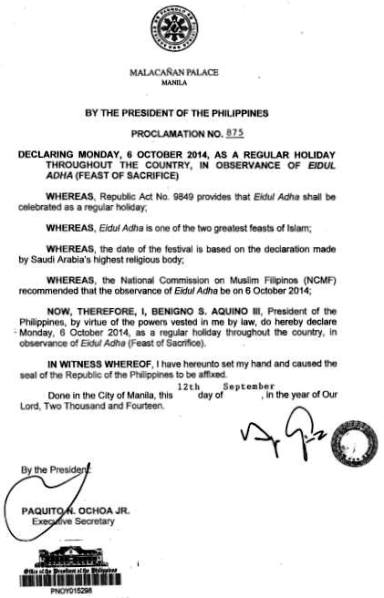 Start planning for this long weekend. If you have some money to spare you can bring your kids to the nearest theme parks in the Philippines. You can also plan for a 3 days 2 nights trip Singapore, or Hong Kong.

Next post: Replay Video KathNiel in Be Careful with My Heart

Previous post: How to Correct Birth Certificate Errors, Wrong Spelling, in the Philippines