English Pop boy band One Direction (1D) will be having a live concert in Manila on March 21, 2015. This is part of their “On the Road Again” second leg concert tour, which will cover major locations in Asia particularly Japan, Singapore, Thailand, Hong Kong, Indonesia and the Philippines.

On May 23,2014 during the special launching event (1D Fans Day), there will be ticket selling at the SM Mall of Asia Arena starting at 8AM until 2PM. The first 15000 customers will get the concert ticket at cheaper price (see details below). 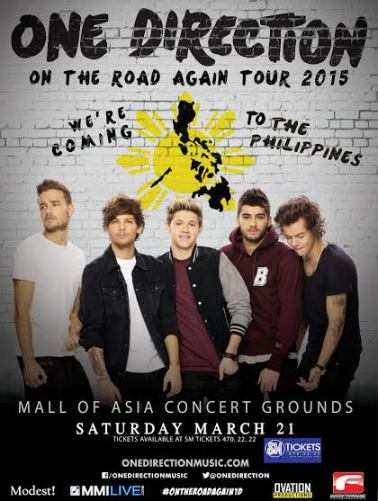 (Take note, however, that there will be additional e-plus tap to pay and SM ticket charges on the above price list)

Those who won’t make it to the special launching event, at 2PM onwards of the same day, fans can get the tickets at SM Ticket outlets all over the country, and on their official website smtickets.com. Fans can also call 470-22-22 for inquiries. (See the ticket pricing below)

One Direction On The Road Again concert in Manila was brought to us by Ovation productions, Futuretainment Inc., and MMI Live. It will be held at SM Mall of Asia concert grounds on March 21,2015 at 8PM.

One Direction an all boy group composed of Liam Payne, Harry Styles, Zayn Malik, Louis Tomlinson and Niall Horan had a series of sold out concerts particularly on their “Take Me Home Tour.”

They were the one behind the hit singles; What makes you beautiful, One thing, Best Song Ever, Little Things, Live while we’re young, and many others.

in Showbiz News
169
SHARES
Share This
0 comments… add one