Plants VS Zombies Is Going to Eat Your Brain

Do you like to play tower defense video games on your PC and Smartphone? You might want to give these Plants vs. Zombies a try. The reason is it would bring back your addiction to tower defense games. It would also cause you sleepless nights just to play this game over and over again.

Why I’m telling you this is because I had that same experience. I got an interest in this game a month ago. I overheard one passenger of LRT (light rail transit) told his friend about this game. He said that every time he arrived home from work, he immediately plays PvZ on his PC or smart device.

I just wondered why it is so addicting and why every time I passed by Juan Luna Street, somewhere in Divisoria, Manila. I always see those mobile phone repairmen play the said game nonstop. So I made up my mind to give it a try. I search on Google for the installer of this game and immediately begin playing it.

At first, I find it to be boring, but as the game progresses, I begin to capture my attention. Every time I accomplished a level, I get a new plant with special abilities to fight the zombies.

It made me do experiments on setups and strategic positions of the plants so I can defend the lawn successfully from zombies. Sometimes I lose, but most of the time I win. This is probably why I am always excited to play the game because I can do different experiments. 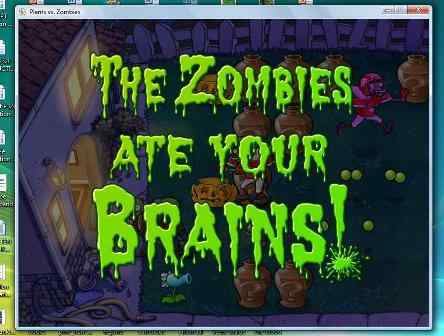 Below is the description of Plants vs Zombies

American game developer company from Seattle – PopCap, developed this tower defense game. You can play this on PC, iPhone, Android, and also on the latest IPAD.

The game was all about a homeowner who uses many varieties of plants to stop groups of zombies from entering his home. If the zombies somehow succeed in entering the house, they will eat the homeowner’s brain.

The zombies here are crazy about the taste of the brain. They would use every means of entrance to get into the house. Starting from the front garden and at your backyard including the swimming pool and last is on the roof and chimney.

At the beginning of the game, the homeowner which is supposed to be you, with the advice of your co-homeowner Crazy Dave, will use the currently available plants to defend your garden from zombies.

Every time you accomplish a level, a new variety of plants is added to your arsenal. You can choose from the available plants so you can defend your garden. The plants include but not limited to the peashooter, sunflower, cherry bomb, wall-nut, potato mine.

Sunflower is very important in every game because this gives the necessary sun points to grow your plant. The zombies also have variety, to mention some flag zombies, conehead zombies, dancing zombies, and others.

At the beginning of the game, zombies are just wearing a suit, worn-out pants, and shoes. However, as the homeowner finished every stage the zombies also become tougher and tougher.

Just like any other game applications, you can play Plants vs Zombies on PC in full screen and or window mode. Aside from the standard mission game, you can also play different modes including the “adventure,” “mini-games,” “puzzle” and “survival.” This game has an attention-catching sound effect that would become more intense once the groups of zombies are arriving.

If you are in the middle of an office meeting and would still want to play the game, I suggest you play in by window mode. In my case, I usually play it in window mode.

The reason is I normally multi-task with my desktop computer while playing the game. This game is so addicting that every time we had a coffee break/ lunch break this serves as my pastime.

in PC Games
0
SHARES
Share This
13 comments… add one