Philippine National Police (PNP) has shared safety tips in an infographic format that tells about Do’s and Dont’s when riding a Taxi in the Philippines.

This is in response to rampant assault, kidnapping, robbery, and homicide which involves some Taxi drivers. The infographic is not only applicable to local travelers, but also to tourists visiting the country. It can preempt whatever is the negative plans of the taxi drivers.

Not so long ago, riding a taxi is considered one of the safest and convenient ways for commuters to reach their destination. Commuters who are in a hurry can ride a taxi to avoid the hassle of riding a jeep or bus where most of the time is full during rush hours. Cabs are also airconditioned compared to PUJ and some buses. You can also sometimes sleep inside the cab.

But as the day go by, it seems that riding a taxi is scarier than riding public utility vehicles (that’s what I feel). This is because of numerous crimes involving some taxi drivers (not all).

There are instances where the taxi driver together with accomplish tries to rob their passenger. Worst comes to worst, the driver will take the life of their passenger because he/she does not want to give their gadgets and hard-earned money.

The Philippine National Police, as an immediate answer to growing crimes involving cab drivers, has released a public service advisory that may preempt whatever evil plans of some taxi driver. Read it below: 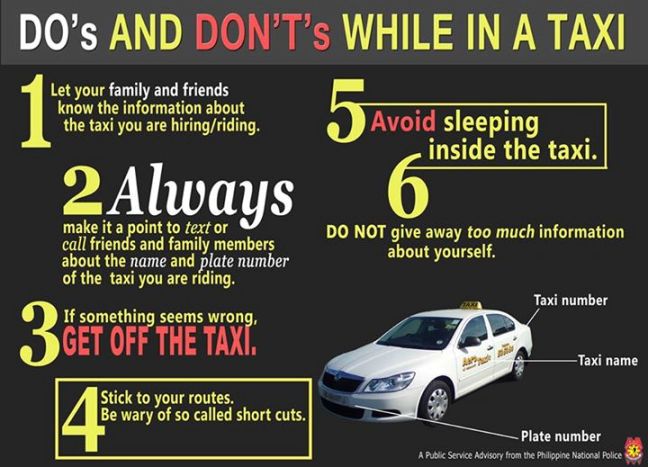 1. Let you family and and friends know the information about the taxi you are hiring / riding.
2. Always make it to a point to text or call friends and family members about the name and plate number of the taxi you are riding.
3. If something seems wrong. GET OFF THE TAXI.
4. Stick to your routes. Be ware of so called short cuts.
5. Avoid sleeping inside the cab.
6. Do not give away to much information about yourself.

I would like to add the following safety precautions which I usually do when riding a taxi. Some are already mentioned on the infographic, but I would like to share the specific things that I do every time I ride a taxi alone or with my family.

These are just some additional safety measures on my part that you can also try practicing. As the saying goes, “safety is not expensive, it’s priceless.”

1. Every time I ride a taxi, I usually call my friends/relative that I am already inside the cab. I mentioned the color of the car body, plate number, and taxi name. I make sure that the cab driver also heard the info I gave to friends/relatives.

This may discourage the driver to do wrong. The reason is my family already knows my whereabouts that includes the taxi that I rode.

2. When I am going to a familiar destination, I try to give the specific route I want the cab driver to pass. Because sometimes I also check if the driver is charging me the right fare for the same route.

If you are riding a taxi or any PUV going to work every day more or less, you already know the travel time and taxi fare that you pay. So if there is a big deviation with the taxi fare, something must be wrong, right?

3. When I travel with my child, I usually tell him not to butt in when I am having a conversation with the cab driver.

Because sometimes the driver asks the places we came from, especially those cabs stationed in the airport. Most of the time, I am just bluffing (yikes!!!) while answering their questions.

If I did not remind my child not to butt in, he might correct me and spill out important family information to the cab driver. I am pretty sure you know what I mean here hahaha.

4. In the airport, I ride the yellow airport taxi. It may be expensive or often doubled the fare cost but at least you know it is based on the regulated fare rate.

While in the city as much as possible I ride a taxi from MGE, Sturdy, EMP, R&E, Dollar, and 24/7. Most of these taxi companies have hotline numbers that commuters can call regarding their complaints. Also, these taxi brands somehow have a good reputation.