Emilio Aguinaldo College (EAC) Generals and Mapua Cardinals have engage in a brawl during their NCAA basketball matchup held on Monday September 22,2014 in San Juan Arena. Watch the replay video below. 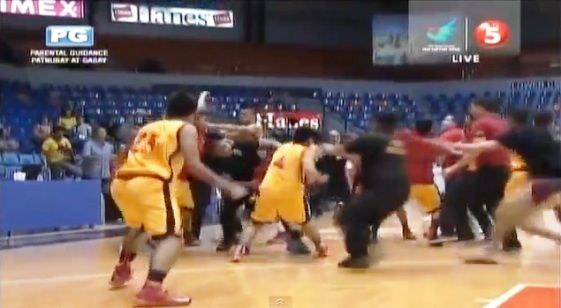 Mapua Cardinals and EAC Generals had a good game during their September 22,2014 basketball matchup where the latter was leading by 9 points (86-77), but it was spoilt by a brawl.

The free-for-all incident happened when there is only 28.5 seconds remaining in the second half. EAC jersey number 14 John Tayongtong bumped to Cardinals’ jersey number 5 CJ Isit at the half-court (no foul called). Isit’s teammate jersey number 7 Hesed Gabo retaliates by deliberately throwing an elbow to Tayongtong. Isit tries to probably restrain Tayongtong but he was punched by the latter. In few seconds, players of both teams went inside the court for the free for all.

Watch the replay video below: