30,000 Job Openings for Filipino Seamen from Royal Caribbean Cruises, Job Lists, and How to Apply (Video)

One of world’s leading cruise line operators, Royal Caribbean Cruises Ltd. will have 30,000 job openings for Filipino seafarers for the next 5 years. Filipino sailors can apply for several positions which include housekeeping, chefs, technicians, carpenters, electricians, cadet program, engineering, maintenance, and a lot more depending on their previous and current work experiences.

Just to give Filipino seafarers an idea about the job openings in RCCL, based on Royal Caribbean International Shipboard careers (royalcareersatsea.com), the second largest cruise line operator has job openings on both Hotel and Marine Operations. 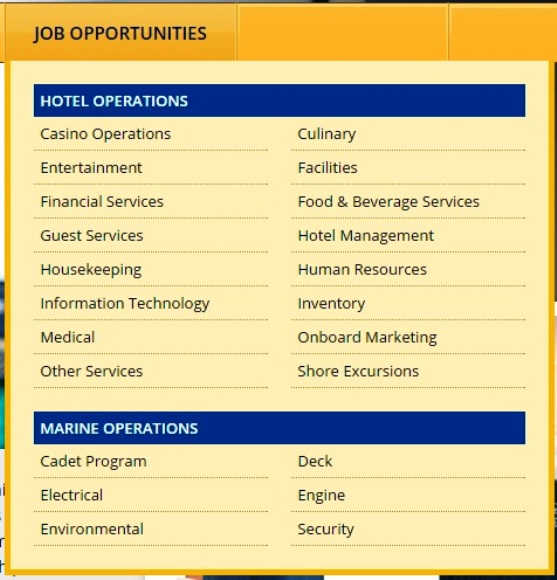 Marine Operations, on the other hand, has job openings for deck, engine, security, cadet program, electrical, and environmental positions. 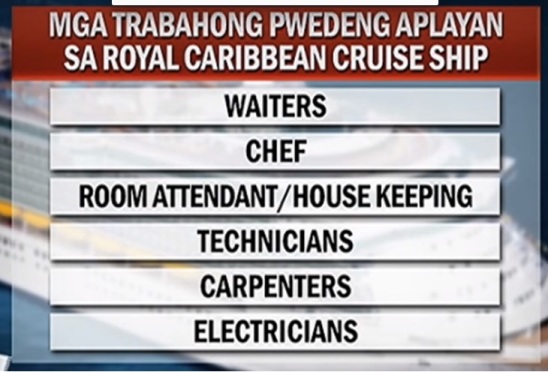 According to TV Patrol, Filipino sailors can apply for positions like waiters, chefs, room attendant / housekeeping, technicians, carpenters, and electricians.

Based on the news report from TV Patrol, Royal Caribbean Cruises Ltd. will establish a direct hiring center in Manila, Philippines so interested applicants do not need the help of manpower agencies and other mediators during their application. The direct hiring centers will also streamlined the hiring process.

Philippine Transmarine Carriers (PTC) will be in charge with the hiring process, while RCCL provides education and skills training to the newly hired and existing crews.

(to be updated with the hiring process)

Currently, RCCL had its first training facility located at Maragondon, Cavite. This is where existing RCCL crews train to widen their knowledge when comes to the ship’s safety procedures. The second training facility will be established at Mall of Asia in Pasay under the joint venture with Philippine Transmarine Carriers (PTC). The second facility is expected to open on May 6 of this year (2016).

RCCL has total of 44 cruise ships plus the additional 9 new ships to be delivered in the coming years. RCCL is the second largest cruise line operator based in Miami Florida in the United States.

Filipinos are composed of a fifth of maritime professionals worldwide. Royal Caribbean Cruises currently has 11,000 Filipino employees. These numbers are expected to grow to 41,000 after they completed the additional 30,000 Filipino crews in the next five years.

According to TV Patrol, employers from shipping companies prefer Filipino seafarers due to their ability to speak the English language, they are hard-working, and because Filipinos show genuine to care to fellow workers and clients.

Next post: Japan Jobs for Filipinos from Hiring Agencies in 2021