The Philippines largest film and production company of ABS-CBN, Star Cinema tweeted several days ago the poster of She’s Dating The Gangster. It is a film adaption of the best selling novel by Bianca Bernardino, top billed by Teen King and Queen, Daniel Padilla as Kenji Delos Reyes, and Kathryn Bernardo as Athena Dizon.

The poster that depicts a long-haired Kenji Delos Reyes wearing a bandana around his head drew mixed reactions from the fans. According to them, it is not the Kenji Delos Reyes that they imagined or as described in the SDTG book. Some remarked that Kenji (Daniel Padilla) looks like an Albularyo (faith healer) instead of a gangster that usually wear leather jacket and shades. See the poster below: 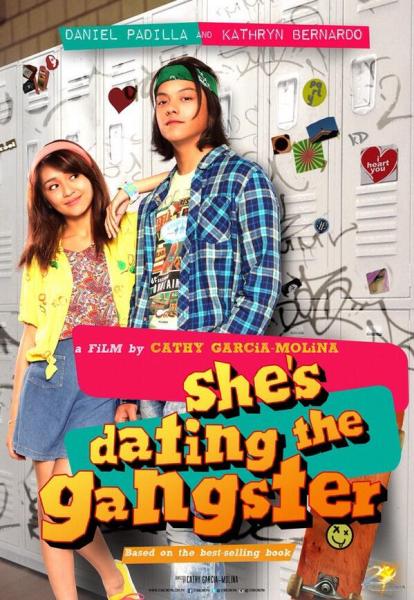 We don’t know as of the moment why Kenji wore bandana or why he looked differently compared to what the fans have imagined. I guess the only way to find out is to watch the movie. Until then, let’s not make any conclusion or negative remarks about it.

She’s Dating the Gangster movie is directed by the box-office director Cathy Garcia-Molina. It is expected to hit the theaters on July 16,2014.

Next post: (Video) Daniel Padilla Visits PBB ALL IN, Gives Flowers to Loisa