Filipina Senior Citizen bound for Singapore is another victim of Laglag bala / tanim bala (planting bullet) at Ninoy Aquino International Airport (NAIA) Terminal 1. The bullet was found inside the pocket of her shoulder bag when it was subjected to the final X-ray check prior to boarding. The incident happened in the early morning of November 1, 2015.

Nimfa Fontamillas, a senior citizen (65-year-old), broke down in tears when she was stopped by security personnel of NAIA terminal 1 due to a bullet found inside her hand-carried shoulder bag. She is travelling to Singapore to watch her grandson participate in the 2015 Singapore Cup.

The victim, when found out that her bag has a bullet in it, has decided to throw it on the floor. She didn’t open the bag until her lawyer arrived to witness the process. At the presence of her lawyer, Nimfa emptied her bag removing its content like cellphone charger, toothbrush, and medicine. It was then subjected to an X-ray machine for the second time. Unfortunately, the bullet was still there. It was inside the side pocket of her bag. 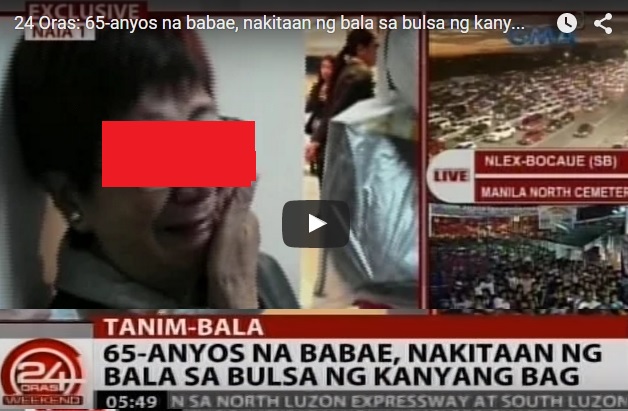 According to Menchu Tan, the victim’s daughter, the side pocket is not secured with a padlock, unlike the main compartment. The former added that there is no reason for them to carry a bullet because they know that it is dangerous.

Nimfa Fontamillas was left dismayed because the bullet was not detected (or was not there) when her bag was subjected to first screening before entering the airport.

Watch the News Report from 24 Oras below:

According to Manila International Airport Authority (MIAA) they will be conducting an investigation regarding the reported tanim bala (bullet planting) / laglag bala incidents inside one of the Philippines international airport. There will be measures to make sure that security and proper procedures are followed.

Meanwhile, Noynoy Aquino has already requested the Department of Transportation and Communication (DOTC) to investigate the issue.

Tagged as: All about Singapore!, naia terminal