Free 30MB internet and Unli FB now available to Smart, Talk n Text, and Sun Cellular. Smart Communications via Chairman Manny V. Pangilinan Twitter account @iamMVP has revealed that aside from the free 30MB of internet daily, they are also now offering Unli FB to its loyal and new subscribers.

The promo is available to active postpaid, prepaid, and broadband subscribers of Smart, Talk N Text, and Sun until the first month of 2015. 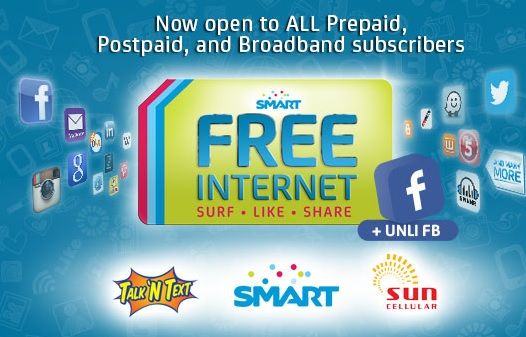 Initially, the free internet is only available to prepaid subscribers and would only last until November 30, 2014. MVP however, twitted on October 2, 2014 that due to the overwhelming response of its subscribers to smart free internet, the promo is also now available to postpaid users and extended until January 5,2015. MVP added that it is Smart’s early Christmas Gift to their loyal and new subscribers. 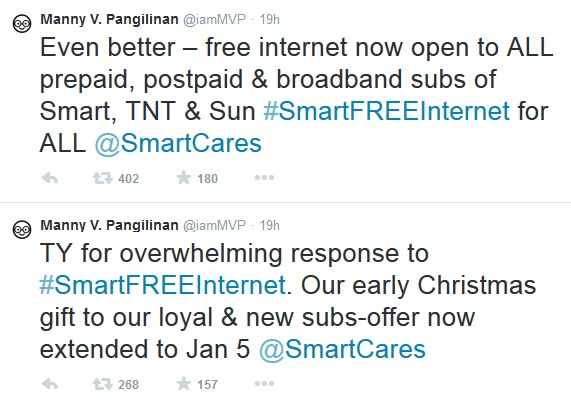 Meanwhile, the social media manager of Smart, Abbie Real @abbiereal explained that subscribers can still continue enjoying the Smart unliFB promo even if their daily 30MB data allocation was already consumed. See her tweet below:

With Free internet, active subscribers can practically do everything; browse photos on Instagram, update the status on Facebook, and send tweets on twitter. They can also read news online via Rappler, ABS-CBN, GMA7, INQ.net, and the likes.

Stream music online thru Spinnr. Surf for information via Google, Bing, and Wikipedia. Do online shopping to the likes of Lazada, Zalora, Ebay, and Amazon. Send emails via Gmail, and Yahoo. These can be done until the 30MB daily internet allocation is consumed.

The free internet promo does not cover the following; streaming videos on Youtube, the use of VOIP apps such as Viber, Facetime, Viber, Skype, Tango, WeChat, WhatsApp, line, and the likes. It also does not cover peer to peer file sharing sites.

To avail the Smart Free 30MB internet plus unli FB promo, interested subscribers can just text FREE to 9999 daily until January 5, 2015. Subscribers should maintain 1 Peso balance or subscribe to any load bucket. Internet service is delivered via 2G / 3G/ and 4G connection at a minimum speed of 12Kbps. See the APN settings below to enjoy the free internet from the leader in mobile. 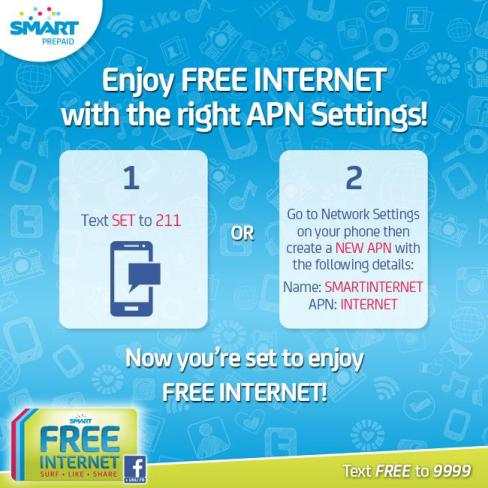 After registering with smart’s free internet, you can set the APN in two ways. Simply text SET then send to 211 or Go to network settings on your phone then create a NEW APN with these details: Name SMARTINTERNET, APN: INTERNET.

According to Smart’s Facebook page, the said settings is necessary to maximize the free internet experience.