Starbucks Planner Promo is Extended in the Philippines

Starbucks Philippines has just announced on its official Facebook page that the planner promotion will be extended until January 23,2015. Are you an avid collector of Starbucks planner, and somehow you won’t be able to complete the required 18 stickers to get your 2015 edition? Here is the good news for you. Starbucks Philippines has revealed on its Facebook page that promo will be extended until January 23,2015. It will be extended for another 15 days from the original deadline of January 8,2015 (Thursday).

Despite the extension, the mechanics to get a 2015 Starbucks planner is still the same. Customers who will buy coffee from Starbucks during the promo period will receive a Christmas tradition card with automatically one sticker. They have to accumulate total of 18 stickers. Nine of which can be acquired by purchasing any 9 holiday featured beverages, and the remaining 9 can be obtained by purchasing core beverages that the coffee shop is offering. They have to complete the 18 stickers on or before the given deadline. 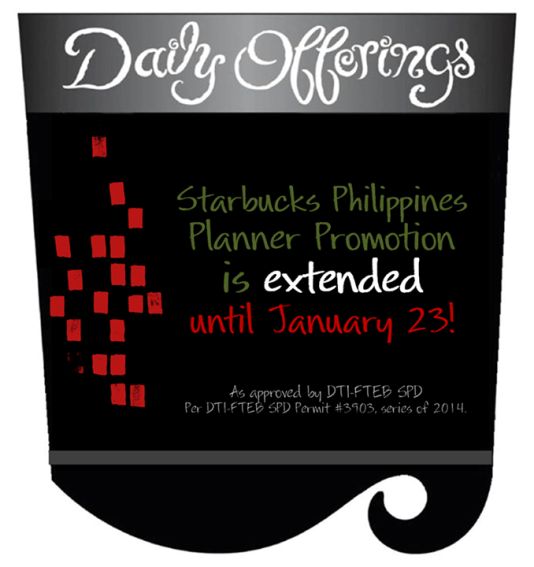 Starbucks Planner promo started on November 8,2014 which is supposed to end on January 8,2015. Perhaps, lots of fans of the coffee shop requested to extend the promo, which is why Starbucks gladly move the deadline to January 23,2015.