Tara App developed by Electronics Engineer and IT expert Jun Lozada is an Anti Theft (Snatcher) App that will surely disable the phone and prevent whoever steal the smartphone from using or selling it to interested buyers.

TARA or Theft Apprehension and Asset Recovery Application is an app that will be installed in the brain or central processing unit of the phone once the owner downloaded it on their device.

Cellphone stealing or smartphone grabbing is very rampant crime in every part of the Philippines. Most of the crime doers eye expensive and branded phones because it is classified as easy money since it can be sold the fastest. Snatchers would usually stalk someone whom they think is helpless to protect their hard-earned cellphone and when that person became alone or isolated, they will begin the act. The worst scenario is even if the helpless individual had given their phone, sometimes they will still harm them and take hes/her life. Sad isn’t it? 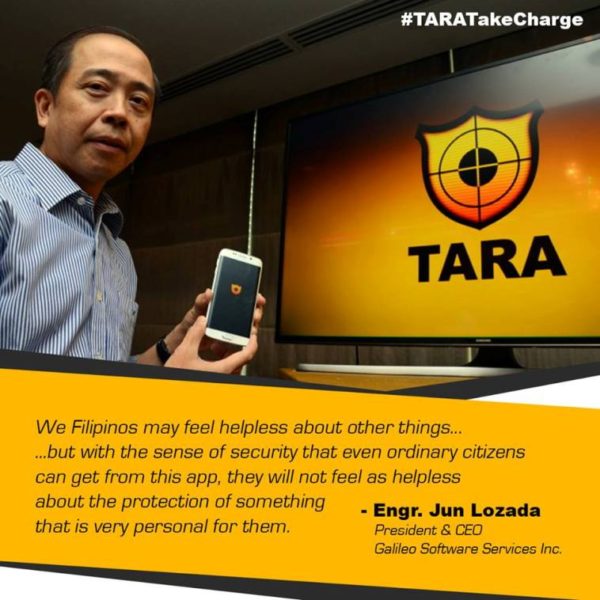 TARA App is considered a “kill switch” of the cellphone. It can be activated by an SMS or by calling the TARA app hotline. Once triggered, it will produce an alarm sound “Magnanakaw, magnanakaw.” It cannot be overwritten even if the stealer removes the SIM, delete the memory, or reformat the cellphone. According to Jun Lozada, this security app is directly installed to the processor of the phone that is probably the reason it cannot be overwritten.

Based on the 2012 data from National Telecommunications Commission (NTC) there are 30 cellphones that are stolen every day in the Philippines. According to ABS-CBN news reporter Atom Araullo, the said data may be smaller since not everyone is willing to report to NTC when their phone got stolen or snatched.

TARA app may not help bring back your smartphone, but at least it will make the life of the stealer miserable. Once the app is triggered it will continuously produce a very loud sound “Magnanakaw, magnanakaw” (thieves) which will embarrass the culprit. Also even if the stealer will remove the SIM and reformat the phone, they won’t be able to use the device.

To download Tara App for free, users can simply visit Google Play, or iTunes, search for it and install it on their smartphone. If you are searching for an alternative security app, then check also the Gotya Face Trap.

To activate users must create a Tara account. They should supply some basic important information like complete name, secondary mobile number, email address, and the unique six-digit PIN. They should create it before installing the app on their phone.

If you happen to retrieve your device you can unlock it by texting UNLOCK plus the 6-digit PIN then send it to the SIM of the retrieved device. You can also call the hotline for assistance.

If you cannot find the app in Google Play and iTunes, there are phones that have pre-embedded TARA app in it courtesy of mobile phone distributor MyPhone. The models are Agua Vortex, Agua, Iceberg, Agua Rain 3G, and A888 duo.

I hope this app will become successful and every mobile phone distributor in the Philippines would include Tara in the list of pre-embedded software on their device.

Previous post: Cherry Mobile Me and Me Fun Price and Specs