Gadget distributor in the Philippines, TechBox has just made the love month February 2015 even sweeter by offering Buy 1 Take 1 Sweetheart promo for their LG P713, LG G2 32GB, and LG E425 smartphones. Aside from that, they also offer free SD card.

TechBox announced on their official Facebook page that they will be offering Buy 1 Take 1 promo for selected LG smartphone products. Starting February 12 until the end of the month (February 28, 2015) customers of the said gadget store can get two units of LG P713, LG G2 32GB, or LG E425 for the price of one. See below the specs of each device: 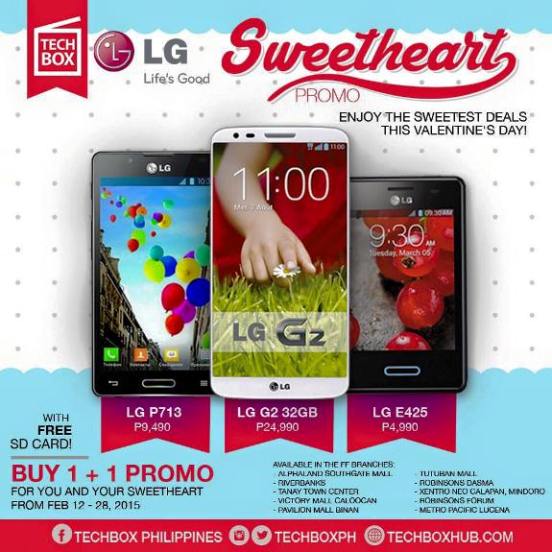 Customers who want to participate in the Buy 1 Take 1 promo can visit any participating TechBox branches starting February 12 to 28, 2015. See the list below:

According to their Facebook page and website Techboxhub.com, TechBox is a retail shop at the same time online store founded in 2013. They are a subsidiary of Tao Corporation, one of the Philippines’ Top 500 corporations.

Visit their FB page and website for more details. You can also check their stores and kiosks Luzonwide. Currently, they have 28 stores located in NCR and Luzon. They have several soon-to-open stores in Stern Mall Candon in Ilocos Sur, Robinsons Mall in San Nicolas, Ilocos Norte, Abanao Square in Baguio City, E-Mall in Naga City, and Gaisano Capital in San Jose Occidental Mindoro.