Local distributor of branded mobile phones, tablets, and tech accessories, Techbox Philippines will be holding The Ultimate Nokia Lumia Clearance Sale this March 13, 14, and 15, 2015. Checkout the list of Lumia phones, their respective price list, and the venue of the gadget sale.

Techbox Philippines shared the upcoming sale on March 2,2015 via their official Facebook page. The 3-day sale will feature discounts of up to 80 percent on selected Nokia Lumia products.

As of this moment Techbox PH haven’t revealed the Lumia devices that will be included in the sale, but based on their website they are selling 15 models: 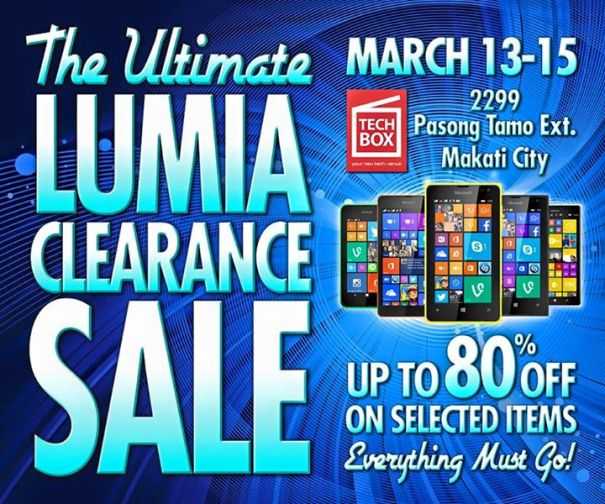 Aside from Lumia, Techbox is also having clearance sale for other Nokia lineups. For the complete details visit their Facebook page.

Techbox PH everything must go sale will take place at 2299 Pasong Tamo Ext. Makati City. All major credit cards will be honored during the sale. They also offer installment plans but not on zero percent interest. Office hours is 10am until 7PM.

Next post: Bamboo, Mitoy, and The Voice Kids Live in Singapore March 15 2015