What Network is this Mobile Number in the Philippines? Check Here!

Here is the list of telco prefix numbers in case you want to know what network has called or sent you a text message in the Philippines.  Use it to verify the mobile numbers of the respective telco network providers based locally.

In the Philippines, you can use it as a reference to determine if the mobile phone number is from a major telco network such as Smart, Globe, TNT, Touch Mobile (TM), or SUN.

Due to the growth in numbers of mobile phone users in the Philippines, it became difficult to track down what network number or prefix number belongs to a particular telco. Unlike some years ago, if the mobile phone number starts with 0917 you already know that it is from GLOBE, or 0919 from SMART, or SUN cellular if the cellphone number prefix starts with 0922.

The growth of mobile phone users can be because many of us in the Philippines can now afford to have a cellphone. Also, Telco’s promotions are becoming cheaper and better to woo subscribers to transfer to their network.

In my opinion, this is somewhat a good thing that many have mobile phones.

As a result, Filipinos are now able to communicate and keep in touch with their relatives, friends, and loved ones in the Philippines and in different parts of the world.

But why do you want to know the prefix numbers of the different networks?

I will make a 99.9% accurate guess. It’s because you want to know if the number you will be calling or texting is from tie-up networks.

Why? So you can enjoy promos such as the all net unlimited text, and unlimited calls for a number of days to fellow network users. It’s cool and at the same time worry-free on your part.

There will be no additional charges when you communicate with them, yet it has lots of benefits. For example, TNT is a Telco that offers internet data and all net text to Smart and Sun cellular. TM has unli calls to Fellow TM and Globe subscribers depending on the offer that you availed.

To be honest, you can save money every month by just subscribing to the same telco that many of your acquaintances are using. Just take advantage of the different promos of the said telco for text, calls, and internet data.

Another reason is to know if you can transfer a load with the same telco subscribers.

Somehow, the prefix numbers can also tell how old your mobile number or subscription is. For example, if the first 4 digits of your cellphone number are 0917, it means that you are a Globe user and your number is most probably 5 years or older. 0919 of Smart is also the same. Probably, the numbers can also tell if you are prepaid users.

Last but not the least, is to determine your crushes’ network to make it less obvious that you are hitting with her/him. Alright, I made that up. It is just a joke.

Whatever your reason is, I hope these telco prefix numbers will serve you well for the purpose you intended to use them to. 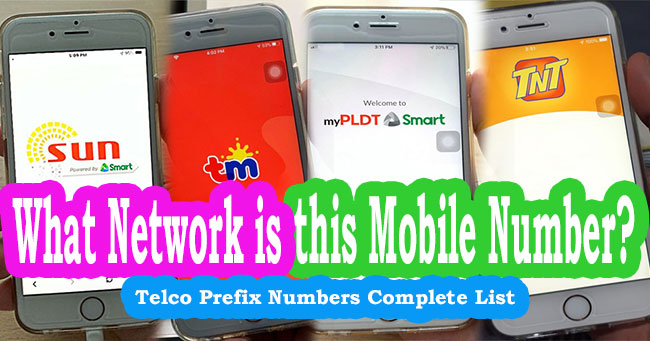 These are the enormous list of 4 digit prefix numbers used by an estimated 70 Million Globe and Touch Mobile (TM)  subscribers combined. Among the list, the most popular ones are 0963, 0966, and 0917.

So far, there are only two prefix numbers for Exetel Network.

On the other hand, Next Mobile has only 4 prefix numbers currently available to its subscribers.

You might be wondering why the major telcos such as Globe and Smart have so many prefix numbers allotted to them. I think the main reason, is that they have more than 100 million subscribers combined. Globe has 70 million subscribers while Smart has 60 million. Unlike Exetel or Next Mobile which probably have thousands only.

You can take note of the list of prefix numbers based on the post. Chances are if you see that the person calling or texting you has 4 digit prefix next to its mobile phone number that is similar to the list above. There is a high chance that it belongs to that particular network.

According to the list, 0945 is a prefix number that is either from Globe Telecom or TM network.

It seems that the prefix number 0961 belongs to either Smart or TNT network.

It is either from Globe or TM telco network in the Philippines.

Based on the list, it is a prefix number from Globe or TM.

Previous post: How to Activate Roaming for Smart, TNT, and SUN Subscribers