The much-awaited Fifth International Pyromusical competition in the Philippines will begin this February 15, 2014 in Manila Bay at the back of SM Mall of Asia, Pasay City.

Eleven pyrotechnic manufacturers from different countries will again be showing off their artistry and sophistication in fireworks technology. The event will run for six consecutive Saturdays starting on February 15 until March 22, 2014.

Platinum Fireworks Incorporated in the Philippines will showcase their creativity in both opening and closing exhibitions.

Here is the complete schedule 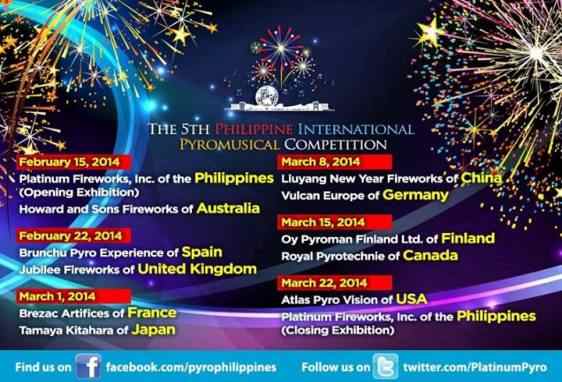 *The event will start at 7PM, but it is advisable to come to the place early.

Tagged as: SM Mall of Asia

Next post: Deniece Milinette Cornejo Before and After Pictures Goes Viral

Previous post: Top Colleges and Universities in the Philippines for Education Course