The Voice Kids Ph Grand Champion: Darren, Lyca, Darlene or Juan Karlos, Who will it be?

The first ever The Voice Kids Philippines Grand Champion will be crowned tomorrow July 27, 2014 (Sunday) during the show’s grand finale at the Resorts World Manila.

Who among the top 4 finalists: Darren Espanto, Lyca Gairanod, Darlene Vibares, and Juan Karlos will get the title of The Voice Kids PH grand winner.

The live performance today July 26, 2014 (Saturday) where the 4 young finalists sing their coach’s hand-picked song for power ballad, and upbeat song rounds probably, gave the public a hard-time choosing who will they vote to bag the title.

For those undecided voters, please watch the replay video below of their respective grand finale live performance. 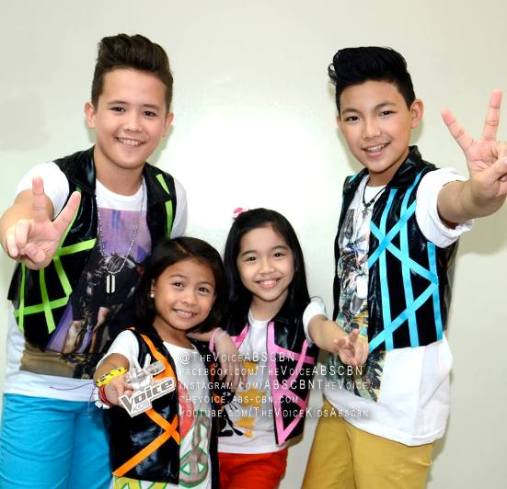 Team Leah’s total performer Darren Espanto sings “Somebody to Love” by Justine Beiber for the upbeat round, and Basil Valdes’ “Ngayon” for power ballad.


According to Sarah Geronimo, Darren’s performance just prove that he deserves to be The Voice Kids Philippines Grand Champion.


Juan Karlos’ “Yesterday” performance leaves the 3 coaches teary eyed. Coach Bamboo is very proud of him, he sees JK as an artist, an actor, and a singer. Team Lea, told that JK has a guaranteed future in the showbizness industry because of his charm.


Coach Bamboo told that he is amazed to see Darlene perform on stage. Coach Lea told her today’s performance is perfect. Coach Lea only finds two words and that is “ang ganda.”

*Image and youtube credits to The Voice Kids Philippines

Next post: (Touching Video) Homeless Guys Arm Wrestle for Money, What Happens Next is Heartwarming