The local reality singing competition from ABS-CBN, The Voice of the Philippines is having an upcoming audition in Manila for the show’s season 2 edition.

On June 3,2014, TheVoiceABSCBN twitter account announced that the popular reality singing competition will be officiating an audition in Manila, Philippines. It will be held on June 8,2014 (Sunday) in Market Market, Taguig. Registration will start at 8:00am and the actual audition will begin at 9am until 3pm. 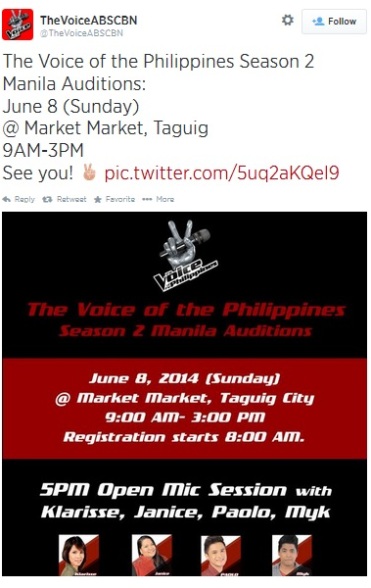 The previous season has four coaches / judges: Lea Salonga, Sarah Geronimo, Bamboo Manalac, and Apl.de.ap. It was hosted by Toni Gonzaga with Alex Gonzaga, and Robi Domingo as the correspondents. There is no news yet as to who will made up the coaching / judging panel. Also, no details if the three previous hosts will still remain with the show.

Meanwhile, The Voice of the Philippines Kids Edition receives positive remarks from its viewers nationwide. Its pilot episode which was aired last month May 2014 has acquired 33.3% viewership nationwide. Its rival show from GMA7 “Vampire Ang Daddy Ko” top billed by Vic Sotto, Oyo Boy Sotto, Ryzza Mae Dizon and many others only received 11.11% viewership.