Top 20 Schools (Colleges and Universities) in the Philippines

Here are the lists of Top 20 Schools (colleges and Universities) in the Philippines for 2012 according to CHED and PRC. This statistics is a result of the study conducted every 10 years by the Professional Regulation Commission (PRC) and the Commission of Higher Education (CHED), based on the average passing rate in the Board exam of all courses of all the universities and colleges in the Philippines. Data is latest as of October 2012.

Out of 20 Schools there are 11 Colleges / Universities from Luzon, 7 from Mindanao and 2 from Visayas. 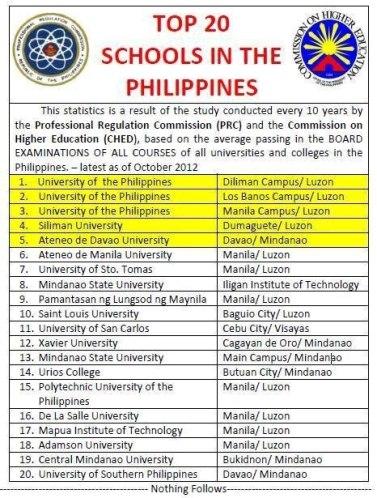 Update: The list of Top 20 Universities in the Philippines which was depicted on the photo is fake as Norman de Guzman, OIC of PRC’s Public Information and Media Relations Department denied that they have released such result. Thanks to reynthology.blogspot.com for letting me know about this. I want to apologize to the readers of this blog for the misleading information that this post has imparted to all of you.