Eat Bulaga’s homegrown love team AlDub has utilized several theme songs during their appearance in every “KalyeSerye.” Alden Richards and his co-equal half in the love team, Yaya Dub (real-life Maine Mendoza) dubsmash the songs to deliver their messages to each other.

I have to admit, AlDub is very effective lip-synching the songs as it brings ‘kilig’ chills to every fan, from all walks of life – teens, adults, grandparents, and even married couples. Because of AlDub, these people were able to reminisce about their past love stories (that’s what they said in some interviews). It is probably the main reason why AlDub became a hit and eventually Eat Bulaga’s ratings skyrocketed shattering their previous record. 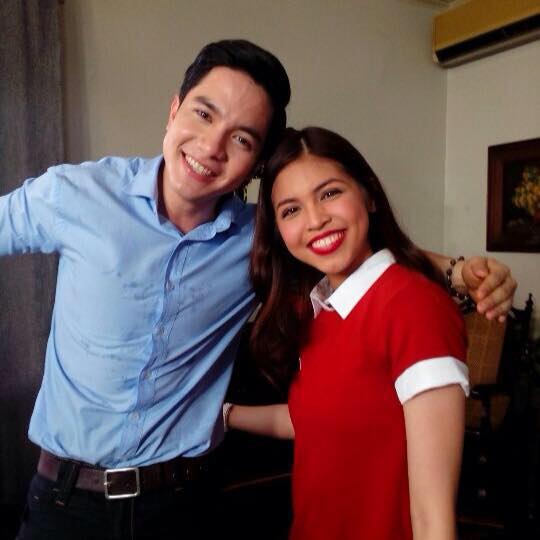 Fans also create/activate their Twitter account to participate in trending every day’s hashtag. Like more than 1 million tweets a day, and on Saturdays, tweets sometimes can reach more than 5 Million.

AlDub’s fans are growing every day, new fans are not familiar with some songs used in ‘KalyeSerye’ so when they heard it, the first thing they do is ask other fans about the song title, lyrics, and the artist /singer behind it. 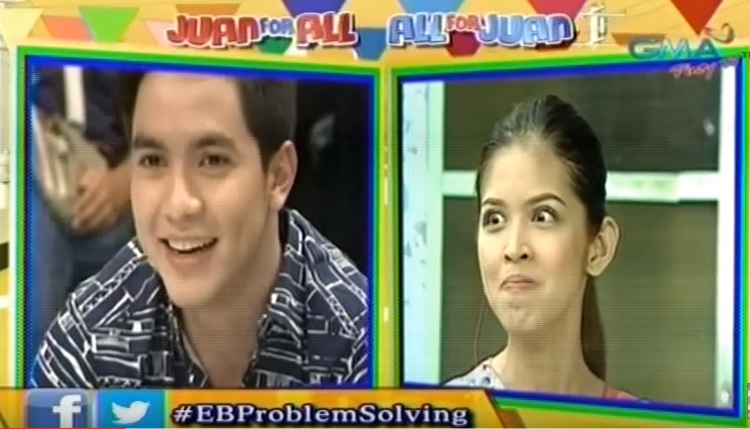 The love team AlDub (Alden Richards and Yaya Dub Maine Mendoza) all started back on July 16, 2015. It happened when Yaya Dub saw Alden Richards looking at her when she performs dubsmash in Eat Bulaga’s unique split-screen monitor.

Yaya Dub became surprised and conscious knowing that Alden is looking at her – She has to cover her face with a fan just to hide her ‘kilig’ in front of million viewers and to Alden as well. Later on, Maine Mendoza revealed that her celebrity crush is Alden Richards, that’s probably the reason why Meng’s reaction is unexplainable at that instance.

Due to their popularity, in the span of three months, Maine Mendoza and Alden Richards have received an offer to appear in TV commercials. Together they got fast-food giant McDonalds, one of the largest telecom company TNT, popular canned foods – 555 Sardines, and detergent brand Zonrox. They also received separate TV commercials. O Plus phone, and magazine cover appearance for Meng, and perhaps Shampoo for Alden.

AlDub, KalyeSerye casts, and Eat Bulaga have received Catholic social media awards. It was given on October 10 to 11 during the 4th Catholic Social Media Summit (CSMSv4) held in Sta. Rosa, Laguna.

God Gave Me You by Bryan White

Bryan White released this song in 1999 under the album “How Lucky I am.”

Thinking Out Loud by Ed Sheeran

The artist released this song in 2014 under the album of the same name.

JaDine released “Bahala Na” in 2014 under the album “On The Wings of Love.”

This song was released in 2014 by artist Brandon Beal under the album “Twek It Like Miley (Hedegaard Remix)”.

This song was released in 1987 by artist Starship under the album “No Protection.” The version frequently used in Kalyeserye is the rendition of MYMP. It was under the band’s album “New Horizon.”

Forevermore by Side A Band

A Filipino band Side A released the song back in 1994. It is under the album “The Platinum Collection.”

Just The Way You Are by Bruno Mars

This is a Bruno Mars original which was released in 2010 under the album of the same name.

I Can’t Fight This Feeling Anymore by Reo Speedwagon

Released by artist Reo Speedwagon in 1984 under the album “Wheels Are Turnin.”

Nexxus is the original artist of this song. The band released it in 1994 under the band’s debut album “Pictures In My Mind.”

I’d Rather by Luther Vandross

Hopefully, AlDub continues to influence positively their fans and soon to be fans in the future. I hope that they will last longer, and they become really life couple ‘Sa Tamang Panahon.’

*Correct me guys if I missed some details.

Next post: Philippine Arena: How to Get There by Commute, and Private Vehicle